An Introduction to Croquet

This introduction to croquet is modified from one prepared in support of an application to become a Recognised Sport by the Commonwealth Games Federation.

An Outline of the Game 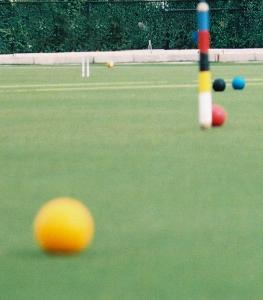 Croquet is played on a lawn or 'court' of dimensions 35 x 28 yards. Almost all croquet is played on completely flat, closely-mown fine grass (similar to bowls). Artificial surfaces, such as AstroTurf or cinder, and indoor carpets are rare.

There are six cast-iron hoops set firmly into the ground, and a peg. The layout never varies. Balls, four to a game, each weigh one pound and have a diameter which, in top-class competition, is only 1/32" less than the inside width of a hoop.

Mallets typically weigh three pounds. Modern materials improve their durability and balance, but substantial change to their playing characteristics through design is banned.

There are two main variants of the game played in the UK: Golf Croquet and Association Croquet (International Rules). In Golf Croquet (or 'the sequence game') the objective of each player is to get his ball(s) though each hoop first. When the first hoop is scored all players move on to the second hoop, and so on. Each turn comprises only one stroke. The merit of Golf Croquet is simplicity and an analogy between it and 'Association Croquet' is like that between draughts and chess. Interestingly, the nation most adept at Golf Croquet is Egypt. Cairo's many clubs play floodlit croquet in front of sizeable spectator crowds.

In Association Croquet a large number of different strokes are used to achieve various aims. Once one ball is struck ('roqueted') it allows two further strokes - the croquet stroke, where the player's ball is placed next to the ball roqueted and both are struck, and a continuation stroke, in which another ball may be roqueted or a hoop run. In this way breaks are established and it is not uncommon for a good player to take a ball through every hoop in one turn. In Association Croquet both of a player's balls have to go through every hoop (that is twelve - each is run in both directions) and hit the peg to win.

At the highest level, Association Croquet has complex tactics that involve 'peeling' the partner ball (where a player's first ball will attempt to strike the second ball through its own hoop). One description of croquet in common use is 'snooker on grass', since the range of skills and tactics, allied to superb hand-eye coordination, is similar to that of snooker.

It is Association Croquet that is mainly played at the highest levels. There are regular World Championships and also an international team event played irregularly between the top nations (in 2000 Great Britain won, from New Zealand, USA and Australia). This event will next be held in 2003.

The third variation belongs exclusively to North America, where a significant variation to 'International Rules' evolved. It differs from Association Croquet in the same way that rugby league differs from rugby union. The skills required for both are transferable, with US and Canadian players, hungry for international competition, willing to adopt the standard version.

Croquet owes much of its recent growth in popularity to having a well-developed handicapping system. As in golf, once a newcomer to the sport has grasped the basics he/she will be given a handicap of about 24. The best players will be on scratch or better. Each point on the handicap scales allows a player to claim a free turn (called a 'bisque') at any point during a game. So, two players, be they male or female, ten years old or 90, or even fit or disabled, can play each other off their own handicaps, on equal terms, with no quarter given and none taken.

Top-level croquet is, of course, played without handicaps. Between players a match, comprising best of three or best of five, is normal. Such a match will typically last between two and five hours.

The origins of croquet are obscure. However, it is known that the sport was introduced to England from Ireland in the 1830s.

In the latter part of the 19th century and early 20th century it grew very rapidly in popularity, being an agreeable pastime for the upper classes, while being played on equal terms by men and women, the old and the young.

When lawn tennis took off croquet declined in popularity and a large proportion of courts were turned over to the new game. Indeed, the dimension of a tennis court owes itself to two fitting snugly within the area of one croquet court.

At the height of its popularity croquet spread throughout the British Empire and this laid the foundations of the game's strongest supporters being within the present Commonwealth.

It is said that snooker probably owes its origins to croquet. A theory, supported by strong circumstantial evidence, suggests that in the rainy season in India, when croquet could not be played, an indoor version was devised. Based on the already established game of billiards, it had green baize instead of grass, six pockets instead of six hoops, multi-coloured balls were retained and the two games have much in common in terms of estimating angles, devising breaks, etc.

Between the 1920s and the 1960s croquet was in decline. However, since then, an increase in leisure time (especially among the retired) and successful attempts to market the game have led to a surge of interest worldwide.

In particular, it is now very egalitarian. Indeed, it is a relatively inexpensive sport and has appeal to a wide range of abilities. In the past 20 years far more young people have taken up croquet and players between the ages of about 25 to 45 form the backbone of international competition. For a sport in which men and women compete on equal terms, croquet has always been a sport where women have played alongside men at the highest levels. Indeed, there was once a famous Australian test team composed entirely of ladies. For a reason difficult to fully explain, while now women still make up about a half of all club players, a much smaller proportion are represented now at the highest levels.

'Serious' players inevitably belong to a club, though judging by sales of garden croquet sets, those that regularly play in the garden outnumber those in clubs by as much of a factor ten.

A club might comprise only one court, or it may have ten or more. The advantages of sharing facilities (well-maintained lawns, equipment, etc.) are matched by having a group of like-minded and willing opponents available for friendly games, club tournaments, inter-club matches and open events. Croquet is an extremely sociable sport. It is quite normal for a player visiting another part of the globe to look up the local croquet club, to wander along and receive a generous welcome.

Croquet is mainly played in a season lasting between Spring and Autumn, during which time there is a wide variety of tournaments to choose from. A large proportion are at weekends. Handicap events are very popular but top players seeking open events also have plenty of choice.

In each country most clubs are affiliated to a national Croquet Association. Such a body will oversee the administration of the game, will attend to marketing issues, publish newsletters, fixture books, etc. and will often provide financial assistance to developing clubs.

The World Croquet Federation (WCF) is the body to which national associations are affiliated. Besides promoting the sport worldwide, the WCF controls the world championships.

An International Laws Committee overseas the laws and regulations and when these are revised each national association is invited to formally adopt them. Tournament Regulations include rules concerning doping, where the guidelines of the International Olympic Committee are adopted for top class events.

The following table shows an analysis of the main countries in which Association Croquet is played, with statistics based on the representation of each in the world rankings. As can be seen, the Commonwealth countries represent about 90% of all top players, with the USA and the Republic of Ireland being the only significant countries outside of the Commonwealth.

The next table shows the number of clubs affiliated to the national croquet associations of the eight major croquet-playing countries of the Commonwealth (i.e. those with at least one player in the world top 100), and the total number of playing members of these clubs.