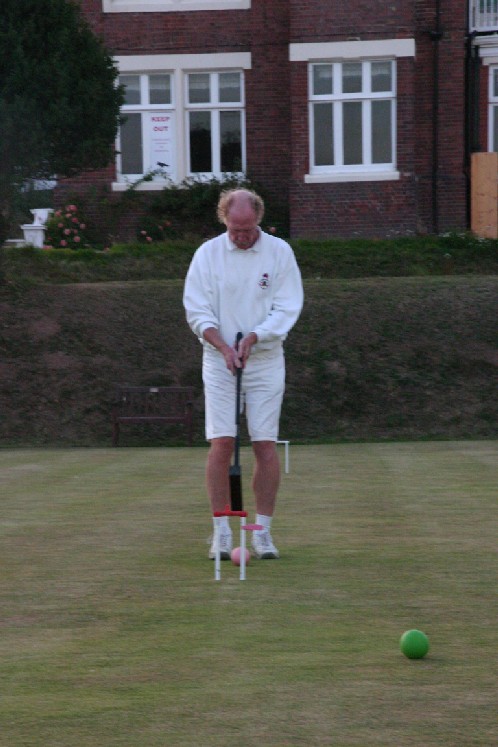 Kevin on his way to victory! (Photo: Eugene Chang)

Sun, Sand, Sea, Wind Oh and Some Croquet or CHRIS DANIELS vs. The BIRDS

This year's Selector's, at Sidmouth, was dominated by the playing conditions. Though they had a good covering of grass, the club's four lawns were like concrete. Hoops were set very firmly and they were extremely difficult to run. The wind was also a factor, causing hitting-in also to be difficult. Consequently play was very fragmented and there were no successful TPs over the three days. Indeed, a nine-hoop break was as difficult as a TP in normal conditions. Most games lasted over two hours and eight went to the three-hour time limit.

The touch players fared better than the 'Heavy Hitters'. The revelation of the tournament was Eugene Chang. Despite being one of the highest handicapped players in the tournament, playing off 2.5, he beat all four of the tournament's minus players; his main attribute was the capability of finishing a break under control.

Sidmouth is a delightful regency-style seaside resort and this thriving club provides a warm welcome. However, one penalty of playing at a seaside resort is the HITCHCOCKIAN intervention of wildlife. When three very large seagulls landed on a lawn which Chris Daniels (doing acceptable impression of Tippi Hedren) thought was his for the remainder of the break he tried to shoo them away, but all three turned on him and chased him away!

The event was played as an all-play-all single block of ten. After two days Kevin Carter led the field, with six from seven, along with Eugene on 5/6 with one pegged down game, which he was losing heavily. On Sunday morning these two met and both played untidily, but Eugene scraped home +3. Despite Eugene then losing his pegged down game he was favourite, since he had to win his final game against David Mooney, or if Kevin lost to Gary Bennett it would be a multiple tie which Eugene would win under the tie-break rules.

Both games were scheduled for the show lawn, 1, which was the fastest and also had some 'interesting' hoop approaches, with an estimated lawn speed of 10 Plummers. A small but appreciative crowd of Sidmouth members turned out to watch. When Gary went to 4-back and peg that game seemed all but over, but Kevin clawed back and pegged-out Gary. In the ensuing 2 vs. 1 tussle Gary hit in once, but failed to capitalise on the chance and Kevin finished. Meanwhile David played his best game of the weekend to comfortably beat Eugene.

So, Kevin won the Ranelagh-Weightman Cup (at his fifteenth attempt!). Eugene's second place was shared with Chris Daniels, David Mooney and a courageous Cliff Jones, who was struggling to overcome health problems.

What was good about this tournament was the relaxed atmosphere with all the players attending the excellent Saturday night dinner at the Bedford hotel and the quality of the venue More CA tournaments at Sidmouth please.