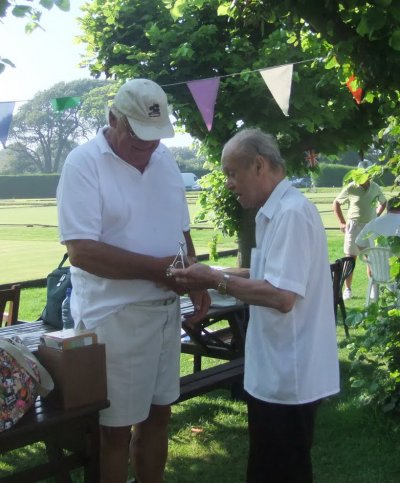 Unfortunately support for the GC Vets this year was the lowest in its six year history with only 12 players making it to the starting line. It was played initially as an all play all American block for which the final block positions set the starting points for the final knock out competition. After block play the top four were David Crawford 9 wins, Chris Sheen 9 wins, Tom Weston 8 wins and Robin Wootton 7 wins. Whilst the remaining eight players played their first knockout round, the top four competed for a mini doubles competition with Crawford and Wootton taking the honours.

The final three rounds were then played as best of three 13 point games. Bill Arliss at last managed to loose the "yips" that has plagued him for so long and booked himself a place in the final with straight sets wins over Chris Sheen and Robin Wootton whilst another Southwick member, Richard Brooks managed wins over David Crawford and Tom Weston to join Bill in the final. Bill managed to keep his "potting" under full control and did not miss as single hoop from less than six feet to give himself a further two straight victory 7-5, 7-6.

It was pleasing to see that John Solomon was present and able to present the Alan Oldham Memorial Trivet.