The April 2014 tests showed "grippier" uprights had a considerable effect on how easy it was to run a hoop. This was measured both in terms of the maximum angle from which it could be run ("critical angle"), and in terms of how tolerant the hoop was of inaccurate strokes from straight in front (how far off-centre the stroke could be). In both cases, the distance the ball travelled through the hope was taken as a measure of how easily it ran the hoop.

The full report of the April tests is available online.

During the April tests, we established that hoops with square parsnips or longer cylindrical carrots both made hoops more challenging, as did (in some cases) more massive superstructures. But the biggest effect was shown when the uprights were less slippery - gripping the ball to some extent.

These factors seemed to make the Atkins Quadway and Egyptian GC hoop both about 5 degrees more difficult to run than typical hoops - the critical angle was reduced from around 45 to around 40 degrees.

But two experimental hoops - using knurled uprights or rubber-covered uprights - were even more effective, and reduced the critical angle to around 30 degrees. Both had wear problems: the knurled uprights took plastic swarf off the balls on contact, and the rubber covering wore through after around 60 strokes.

So the CA Equipment Committee decided to explore this effect further, and seek a material that didn't pose a threat to the balls and which would also have a long life. An obvious choice was polyurethane (PU) - which is the core ingredient of Dawson balls.

Dave Trimmer produced for the Equipment Committee a test hoop with PU coverings (about 2mm thick) to the uprights. The test hoop only has the PU at around half-ball height - any production hoop would need the PU to extend right up the uprights.

This was tried informally/ subjectively at the Inter-County Championships, where perhaps 30 people tried it themselves. As reported below, a supplementary objective test was undertaken using the same rig as the earlier tests.

The top 15cm of soil was damper than during the April 2014 tests, so the results should not be precisely compared to the previous tests.

The new test hoop - Hoop 9 - was compared to our standard reference hoop (#1) - the production Aldridge hoop. 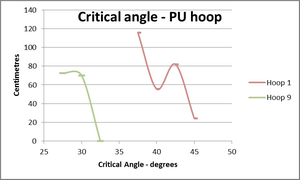 As previously found, the critical angle of Hoop 1 - a typical hoop - was around 45 degrees.

But Hoop 9 with the PU uprights had a much narrower critical angle - 32.5 degrees. Extreme angled shots also resisted "bullying" to a good degree.

This is a much more significant reduction that found with any other production hoops, including Atkins or Egyptian GC hoops. 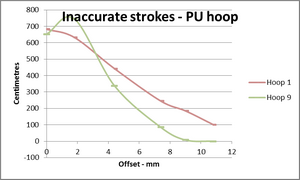 Similarly, while an accurate hoop stroke ran through much the same as with our reference hoop, once the stroke was 4 or more millimetres off-centre, the "runnability" quickly fell away. Hoop 9 was much more resistant to poor straight strokes.

Comments from those who tried Hoop 9 at the Inter-Counties showed:

This supplementary test has confirmed that "grippiness" is a significant factor in producing an elite AC hoop.

PU is an appropriate material. There was no sign of wear on either the PU uprights or balls after the tests.

It is probable that the 2mm thick coating of this particular soft grade of PU was too "squishy". This gave rise to the rubbery rejections on gentle strokes, and the greater depth that could squash probably contributed to allowing harder strokes to run more easily than gentle ones.

We need to home in on a firmer grade of PU and clarify how best we could cover the whole of the uprights with it. There are several possibilities: tubing, mouldings, PU spray coating, etc. Having found an ideal grade of PU (or some similar plastic) and worked out how to coat the entire uprights, we should then: