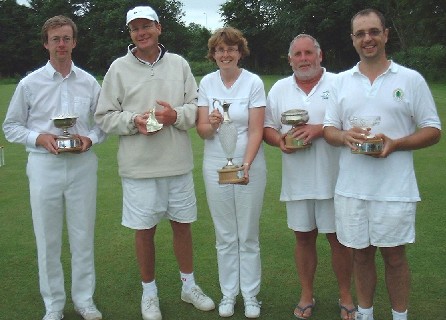 The sun baked lawns and firm unforgiving hoops set in concrete ground made break building difficult. Many hoops were clanged. TPs were soon abandoned. The highlight was Dave Nick's valiant sextuple attempt. He did 4 peels before running hoop 6, had roll jawsed the peelee in penult whilst taking position to rush the pioneer after 1 back and failed to roquet. A large contingent of Bowdon raiders won all but one prize on offer.

Winner of the Fastest Pegged Out Game