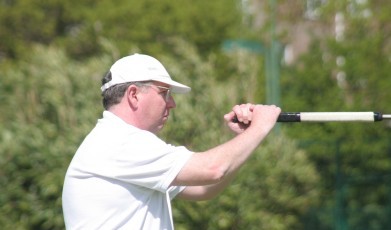 It was a good final with one error from Kibble and one (perhaps less obvious) from Rob. Rob was taking his breaks and SXPs round (SXP in first two games without Kibble running a hoop) and Kibble was taking his breaks and TPs round. I thought Kibble's opening tactics when playing first were slightly weak (going to the east boundary so no threat of getting round in the third turn) but it largely came down to shooting, where I would say that Kibble came out the better. He'd had a polo (a mint shot, going through the hole in the middle) due to hill in the 1st (which must have been rather gutting) and Rob had a non-hilling polo in the 5th. Rob's break play was majestic as ever but was not shooting that well. For Kibble, hitting his tea-lady in the 4th and his lift in the 5th were rather key!

I would say he looked cool, calm and relaxed until the start and end of his final turn, where we enjoyed watching the steam rising; he held it together well though. So in summary, I think it's further proof that with good shooting and simply taking breaks (& preferably TPs) round, any of us can take on the gods.

Rob won the toss and went in with a super shot, Dave went just North of the 19 yard position on the E boundary, Rob shot from B-baulk at an angle missing but leaving himself about 10 yards from the ball. Dave shot at the double from B-baulk, missed the front ball and hilled off the second to go through the non-existent gap. Rob went to 1-back with a cross-wire at 1 and laid up in corner 3.

Dave took the shortest shot, and the one that would make it most difficult for Rob to peel 1-back early, missing by a couple of inches. Rob demonstrated his mastery with a sextuple and was peeling 3-back before 6. (26sxp)

Dave went off the E boundary just north of 4, Rob played a hoop-high Duffer, Dave hit the short shot at partner but fell a few yards short of getting a rush to 1 on the Duffer ball; he also failed to move the balls far enough from baulk for a dream leave. Rob hit and went to 1-back, popping both oppo balls to 2 with a perfect cross-wire at 1 and laid up in corner 3 (hoop 1 ball) & 4 yards up on the East boundary. Dave missed the shot at the 1-back ball. Rob once again displayed his mastery with a faultless sextuple. (24sxp)

Rob played super shot, Dave went just south of peg-high on the E boundary, Rob shot from corner 3, missing into corner 4. Dave shot from A-baulk at partner, hit, and went to 4-back with a D-spread.

Rob missed the long lift from B-baulk and Dave finished with a (never quite under control) delayed TP. (26tp)

Dave went to the East boundary, Rob played a shorter Duffer (about a yard short of hoop 6), Dave shot at the Duffer and missed. Rob went to 1-back with a cross-wire at 1 and laid up in corner 3, with only the corner ball visible. Dave hit but a poor rush to 1 resulted in a long shot after running 1, which Dave missed. Rob had something like a 6-yard shot with his 1-back ball and a 12-yard shot with his hoop 1 ball - he took the longer shot and missed. This time Dave didn't miss and went to 4-back, popping Rob to 2 and leaving an MSL, with the hoop 2 ball on 2.

Rob took the short lift from A-baulk and missed; Dave finished with a TP. (19tp)

Rob played super shot, Dave went just south of peg-high on the E boundary, Rob shot from corner 3, hit centre ball and went to 4-back, almost managing a POP on Dave's ball on the way. However, he slightly over-hit opponent's ball on the leave and went to corner 2.

In the first round of the tournament, Rob had achieved two POPs on the third turn against Jenny Williams, an effective anti-triple device. He mentioned that you have to get the first peel by rushing in front of 1 from 4 or 5, and then gather the balls up to peel 2 after 1-back, and then 2-ball 2-back and 3-back. In practice, rushing in front of 1 is very tough, and, if the peel fails to go through, you end up 2-balling 6 and 1-back just to keep going.

Back to the decider, Dave took the lift from B-baulk and hit in corner 2. He debated the likelihood of getting the ball out of the corner going to the two balls on the E boundary, but elected for the take off to be sure of missing hoop 6 (which Rob had left in the way). Dave went to 4-back with one POP and a D-spread with the peg ball propped up against the peg and not rushable to 2, however, there was a double for the far ball. Rob shot at the double without taking the lift but missed through the middle. Dave almost completed a standard TP by jawsing the Rover peel before 3-back but kept the crowd entertained by having a too-deep pioneer for 4-back and not getting a good rush after 3-back.

A take off, leaving the penult pioneer in the middle of the lawn made 4-back a cert - however rushing into the back of the hoop meant a rush back to the middle of the lawn after the hoop wasn't possible. So Dave took off to Rover to complete the peel and to approach the Penult "pioneer" from the right side - but the pioneer was in the way of the take-off! A couple of inches clearance made sure the crowd were on the edge of their seats, but the shot was a success, and the Rover peel was completed. A take-off got a good rush to Penult. After Penult, a rush to the ball abandoned at 4-back, and a rush to the peelee, now Rover pioneer, behind Rover, accidentally crashed into Rover, making the approach and hoop a cert. As is traditional on such occasions, the rush to the peg went straight and stopped just a few inches short of disaster - another lucky win! (16tp)