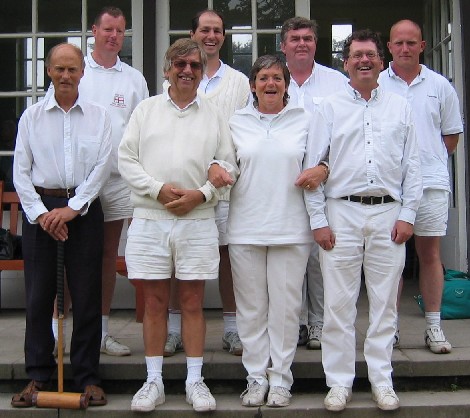 In round 10, rain stopped play for a considerable period of time. When they restarted they were double-banking due to standing water on some lawns.

The final round saw Chris Williams on 9 and Sarah Burrow on 8 with a pegged down game to complete against Nick Parish. Nick is 4-back and peg, having pegged out Sarah. Sarah is 4-back with a lift and with K on the west boundary about level with 6 and U about 6 yards away in the lawn towards the peg. Sarah missed the lift at black from the end of B-baulk. Nick joined up in corner 3 with Sarah in corner 1 giving, according to Nick, a 31-yard shot. Sarah hit and finished to force the play off.