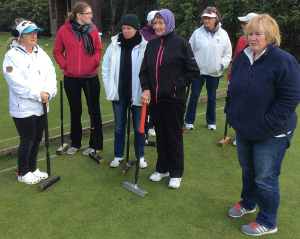 A group of 23 women players met at Nottingham Croquet Club on April 18 and 19 for a coaching weekend in preparation for this year's AC World Championship to be held in July. Twelve of those present already hold a place in the event and most of the emainder are intending to try to gain a place at the qualifying event at Nailsea. The event was organised by International performance Director Ian Burridge, assisted by Keith Aiton, Debbie Lines, Ian Lines and Ian Vincent. Topics covered included break play, openings, lift leaves, timed endings, playing under pressure and laws. The weather was better than the photographs suggest.