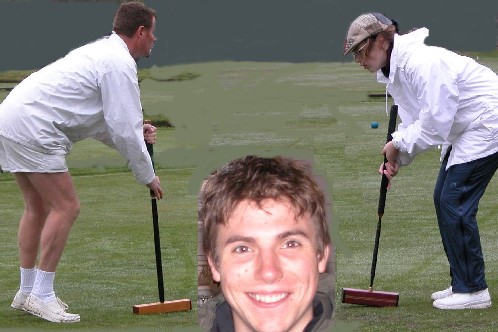 Clear favourite Chris Clarke was well out of sorts and his first round opponent, Paul Salisbury, showed no mercy. Chris got to peg and 4-back when Paul hit in again and pegged Chris out - a cardinal sin one might think, but Chris didn't get the luck he needed and Paul played well enough to stay ahead. Philip Brabazon and Chris Daniels were the newcomer strong performers in the main event; Chris earned his gold merit award with a skilful TP against Tim Wilkins, the only top four seed to survive the first round; meanwhile Louise was the only top 8 seeds to survive to the quarter final stage and she went on to win the final by the well-tried method of making fewer mistakes than opponent Chris Daniels in the heavy wet conditions. Chris demonstrated a strong technical ability throughout the tournament and fell down only on some tactical decisions, this will no doubt be corrected with experience.

Jamie Burch, another newcomer, stormed the plate with some excellent croquet, beating Tim Wilkins +17 in the final.

David Hopkins continued to build on his formidable shooting and hoop running, and is becoming a more than competent Association Croquet player.

Lunch was excellent, as one has come to expect of Southwick, including a very welcome steak and kidney pie on Sunday, hurried through to fill up the players rained off from 11AM until just before normal lunch time.

The lawns were in a pretty poor state though, which will probably add some interest to the forthcoming Golf Croquet World Championship there.