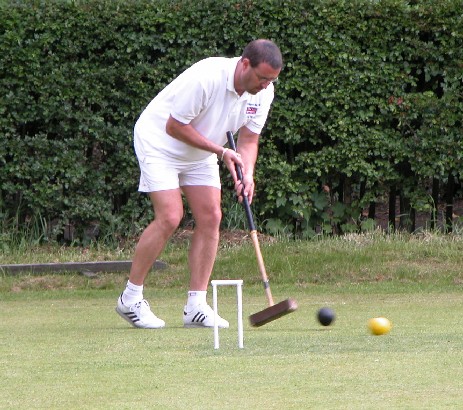 There were some vaguely interesting endgames in the latter stages of the draw.

The best game was between Mark Avery and Louise Bradforth. Mark was on course for a 7th turn +17tp, but could only peg out one ball. Louise played an all-round 3-ball break. She could have left a longer shot, but it was defended. Mark missed, Louise finished for a 10th turn +1.

Henry Fellows was rover and peg against Roger Jenkins (on 2-back & 4-back), when he inadvertently pegged out one ball (a "grievous"). Cruelly Henry let Roger scrape round until a missed peg-out gave Henry his last chance, which he took.

The final of the draw saw Henry peg out Louise with the backward clips on 3 and 4 respectively. Louise made nothing off the contact, but both sides had good chances until a farcical interlude at rover gave Louise the game.

Meanwhile Avery was storming through the process, and while his performance in the play-off was not quite as clinical as the score suggests, the victory was deserved.