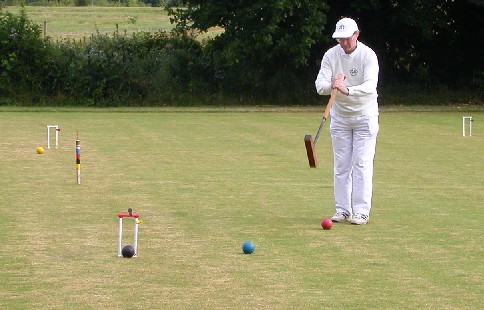 Jeff Dawson won The Championship of Surrey 2004, defeating Jeremy Dyer in a less than thrilling final which had the several men and a dog assembled crew of motley spectators on the back of their seats.

Dressed predominently in white (in line with the Tournament Regulations), Dyer took a one-nil lead despite failing the pegout to complete a brilliant delayed tp, but finally smacking the peg from 15 yards when Dawson failed a hoop. The second game was all Dawson as the rain came down and the court slowed. The third game could have gone either way but in the end it was Dawson that adapted quicker to the changing lawn conditions and the title was yet again his. Our guest from Saddleworth, Liz Fleming, presented the trophies.

Kevin Carter won the Plate, defeating Samir Patel with a flamboyant and indeed rather lucky triple in the final. Well, Samir seemed to think it lucky.

The weekend saw mainly hot sunny conditions, fast(ish) lawns, and hoops set superbly and tight which held Noble and firm against the onslaught of balls. Ie, loads of players kept breaking down and the standard of play was decidedly average as most couldn't cope with the tough conditions. Games went to time and triples were rare.