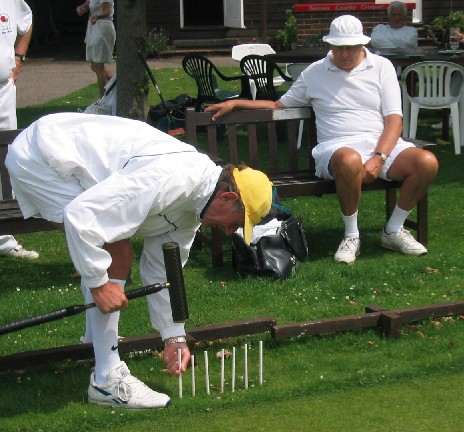 Now that I am an oldie I played in the Seniors' at Southwick this week, but you will observe that I do not feature much below!

Weather: decent for the most part - lots of thunder on Saturday but only 20 minutes rain, and a spell of more continuous rain on Sunday morning.
Lawns: heavy, even immediately after they had been cut.
Hoops: firm.
Catering: excellent, as ever.
Paul Macdonald's management: quietly understated and delightfully smooth.

Up until Sunday morning it looked as if an unbeaten David Mundy would walk away with both the Trevor Williams Cup and the Handicap Singles. But then David Parkins (with one previous loss) triumphed in the rain to become Seniors' Champion (on the basis of who beat whom). Later the sun came out for the X Handicap final but Alan Cottle proved too much, relegating David to yet another bottle of Bellingham's fine wines, for which all runners up were immensely grateful!

All played as American blocks.