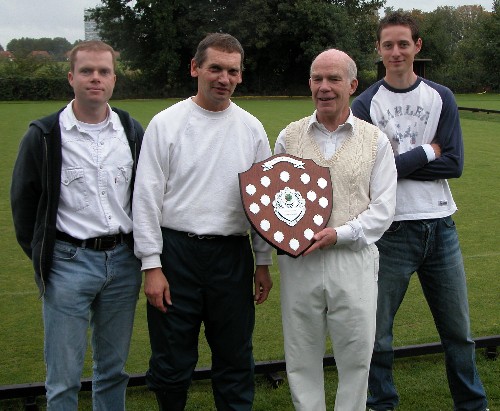 In the first game, Dave Kibble was in a dominant mood against Roger Jenkins despite finding the fairly heavy lawn difficult, until his triple came to grief by taking off behind the 3-back pioneer off the lawn! His clips remained on penult and 3-back for a considerable time whilst Jenkins failed to get going on numerous attempts.

James hadn't lost a game in the InterClub this year so had high expectations but failed hoop 1 on turn three leaving Don a ball next to 1, which he made a double from. Unfortunately, Don clanged the hoop instead of the ball and handed it all back but James was having none of it and quickly gave it back to Don, who refused, and so it went on until James eventually forced a ball round. Don hit the lift but again failed to get going immediately but eventually got to 4-back with a D-Spread but the peg ball was un-rushable to 1. James missed; Don's best effort caused the ball to spring off over to the E boundary. Eventually he took control and made a good leave ready for the finish, but James hit the 25+ yarder and finished with a neat standard TP.

In the doubles, Ed had a ball round fairly quickly and the lift was missed; then the Goacher antics started. He took several turns to run hoop 1 and then several turns to run hoop 2 with lots of missed shots from the opposition in between. Then Goacher embarked on a tidy delayed triple, including a rush of peelee, which had been the 2-back pioneer, to eight inches directly in front of penult (its hoop) with the other balls in very favourable positions. Dave Kibble left him lining up the peel while he went to the adjoining lawn, missed a diagonal shot, replaced the ball, and returned to his seat to find Goacher still lining up the peel! Eventually he played a straight stop shot, just jawsing the peelee. No real danger though and he finished with a straight Rover peel.

Lunch was excellent: chicken baked in lemon, Basil and Garlic with rosemary and thyme rice - a superb combination; desert was a crushed ice flavoured with ginger surrounding fresh fruits, including lychees, oranges and limes.

Ed, being a vegetarian, missed out on the chicken, which was probably why he didn't play so well in the afternoon. He got going on turn 3 but failed at hoop 3 - Robin peeled him through with the 4th turn roquet but failed to get going. Ed hit with his backward ball but failed three again. This time Robin went round with a good leave, the lift was missed and the rest was TP history.

Dave Foulser didn't get much of a look-in against Dave Goacher, several missed shots and defensive cornering didn't tease out a big enough error to cause the Goat to break-down.

Dave Kibble replied to James Dixon's super-shot opening with a maximum distance position on the E boundary, which James missed. Dave hit the super-shot ball and went round but only managed an OSL. James hit the corner ball but failed 1. Dave hit with the 4-back ball and made a good wired leave, James shot and clanged on hoop 5 giving Dave an easy pick-up and a standard TP.

The decider then was left to Roger Jenkins and Don Gaunt. Don had a +26tp under control but missed the Rover peel going to 3-back and ended up cross-wired from the pioneer. Roger hit and went to 4-back, Don missed the lift and Roger went to peg but made a poor leave, which Don exploited by finding a long shot that didn't give Roger an easy start. Several turns passed with Roger not getting in front of 4-back and Don either not shooting or missing. Eventually Roger embarked on a 2-ball finish, rolling up to penult from several yards to the side with Don in corner 1. Roger ran penult but didn't want to risk rolling up to Rover and made a leave. Don hit this "final" shot at partner (for Rover) in corner 4 with his 3-back ball. For some reason, he left it there and took-off to Rogers balls, which were well off the W boundary. The rush to 3-back wasn't good and Don decided to punt the ball to safety getting position, he ran 3-back but missed partner in corner 4. This left Roger a double from 4-back into corner 4 with partner not too far from Rover. He missed. Don intended to go to peg with the forward ball but failed Rover. Roger hit and ran Rover hampered, roqueted partner and rolled up to the peg, pegging striker's ball out. Don missed the cross-court shot and Roger hit the peg - a truly memorable way to win the Inter-Club, both players had their team-mates on the edges of their seats for the best part of an hour.