John Solomon: CA says "Farewell and thanks for all the feats!" 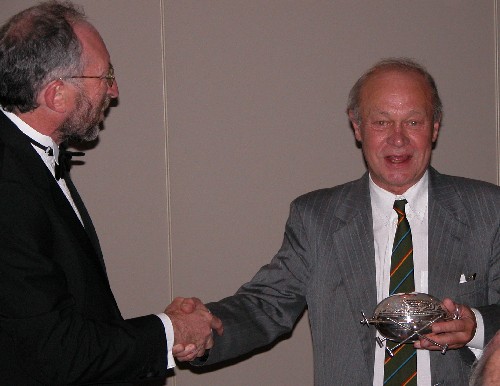 This year's AGM saw the retirement of John Solomon as President of The Croquet Association, after a 22-year reign. Bernard Neal succeeded John as President and praised John's achievements both on court and in the development of the game throughout the world, particularly in the USA. One of the trophies bearing John's name is the Solomon Trophy, played for annually in a mini-test between GB and the USA; another is the peeling prize presented at the Opens for the most successful peeler.

Testament to John's great success as President came in the form of eulogies from croquet friends all over the world: from top players who John had undoubtedly helped inspire to reach for greater things; to messages from Croquet Australia and the USCA. Tremaine and Gail Arkley made a most generous bequest to be held in John's name comprising many croquet-related artefacts and artworks and a trust fund to develop the collection. Council awarded John a Council Medal, its highest merit award, to acknowledge his contribution to the game's development.

Stephen Mulliner produced an excellent multi-media presentation on John's long career, which was enjoyed by all that watched it.

Then came the Dinner to mark John's retirement and to honour his achievements. More than 60 enjoyed Hurlingham's hospitality and then heard more speeches marking John's long career. Council, on behalf of the CA, presented John with a beautiful silver croquet-themed butter dish, and David Openshaw presented a plaque on behalf of the USCA. Then it was the turn of the great man himself, who began characteristically to applause by saying that we had heard so many wonderful things about him, "I won't pretend that they aren't true, they are, and I'm proud of them".

In his time as President, John has attended all of the major tournament finals, including World championships in England, New Zealand, Australia and France. One thing's quite certain: John may have retired as President of the CA, but we'll be seeing him around the tournament circuit for many years to come and the good wishes of his croquet friends from all around the world will keep him warm forever.