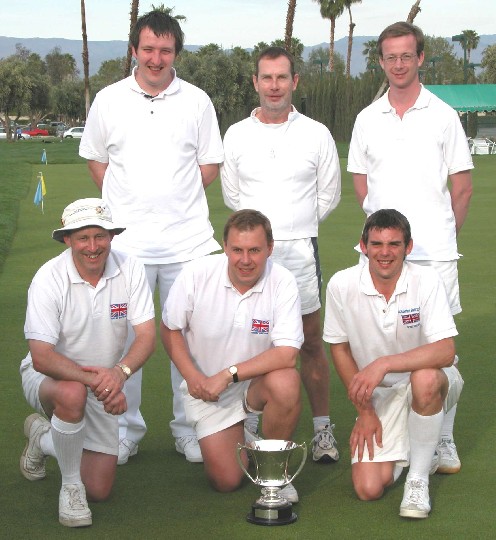 The Stark & Drake v Fulford & Lines match went 7 turn, 6 turn and 8 turn. In the first game one lift was missed, in the second game there were no errors, and in the third game there was one mistake, when Lines stuffed the third hoop and one missed lift by Fulford.

In the Stark & Drake v Mulliner & Death match, the first game Mulliner failed to get started after which Drake hit in from H2 to H4 went to 4B, Death declined the lift shooting at a half ball toward the peg and missed. Stark finished with a triple. In the second game Mulliner set the supershot, Stark hit and crossed wired at the peg, Death shot near Stark leaving Drake a double from C1. Drake hit and ran to 4B, Mulliner hit and TPO'd Drake. Stark set a squeeze at H1, Mulliner went to C4, Stark went through H1 to the north boundary hit Death and was a bit short on the roll and missed the severely angled hoop staying almost on one upright. Death joined Mulliner in C4, Stark went softly in the jaws of H2. Death took off from Mulliner and went 3-4 yards north of H2, he missed Stark bouncing toward the west boundary, Stark scored H2 and just snicked Death's ball. A good roll to H3 and the game was finished.

Soo & Huneycutt v Burrow & Gibbons: Game 1 was scrappy, with several errors. Huneycutt had the first nine hoops, but Soo could never put together a clean turn. Gibbons eventually made it round to the peg with a good leave, and Burrow finished. Soo had the first break in game 2, set up by Huneycutt with a turn 3 roquet of a short Duffer tice. A few turns later Huneycutt went round with no peels to a B spread, leaving a wide join. Another missed lift, but Soo failed to finish. Soo eventually two-balled the final three hoops, with an opponent ball near corner I, but missed a long peg-out. Gibbons broke down at 2, Huneycutt took a gentle shot at the peg, which missed, but left Gibbons and Burrow with effectively no shot. In game 3 Huneycutt went round fourth turn, Gibbons missed the long lift, Soo broke down at 2 (off partner). Burrow cornered, Soo set a rush at 2, Gibbons played a wide join. Soo went round, Burrow missed the short lift, and Huneycutt finished.

Quite a contrast to Curtis and Jerry's world-class play, but a win nonetheless and a good debut for Huneycutt.

Drake performed magnificently against the world #1 Fulford. He did make one error in the match, croqueting a ball off the lawn while making his 4-back leave in game 1. Fulford went to 1-back with a defensive leave, peeling Drake through 1 and leaving a wide join in corner III. Drake hit the 35-yarder, took off to the corner ball, getting a good rush to his hoop. He then organised a break and a delayed-triple finish. In game 2 Drake again had the first break, this time with a proper leave. Fulford hit the lift and went round to 1-back, as usual peeling Drake to 2. He again attempted a defensive leave, but didn't quite get his ball into the jaws of 3 as he intended. Drake hit another "tea-lady" shot and finished with a standard triple.

Stark and Cherry also won their matches for the USA, while GB's less experienced crew of Gibbons, Death and Lines won to pull GB even on the day. GB then took the lead in each of the two remaining matches from the "floating" doubles round, Burrow and Gibbons with a fifth-turn finish against Bidencope and Cherry, and Fulford and Lines with a scrappier win over Huneycutt and Soo.

Match tied at 7-all

GB struck back to win the third doubles round 2-1, then earned another point in the floating doubles round. The remaining match in that round has been pegged down in game 2, with Cherry & Bidencope to play but needing to hit a long shot to get in.

Each side is of course hoping to win at least four of tomorrow's six singles matches and thereby win the test before the remaining doubles match resumes.

This is the first time a US team has led or stayed even with GB through the event's first four rounds. Tied 7-all (with GB leading in the pegged-down doubles match) at the start of the final day, the Americans had a real chance of winning the test match for the first time ever. But the Brits quashed that hope quickly and completely, winning all seven of the remaining matches. Thus, despite the strong start, USA did not even equal their high-water mark of eight wins, achieved in 2002.

Matt Burrow had the honor of winning the decisive match. The best turn of the day was Robert Fulford's sextuple peel. As it happened, the test match was already decided at that point. But GB's captain put on a crowd-pleasing performance, essentially accomplishing everything he wanted on the turn, peeling 1b after 2, 2b before 4, 3b before 5, 4b (on a rush peel) before 2b, penult before 3b, and finishing with a straight rover peel from a few inches in front of the hoop.