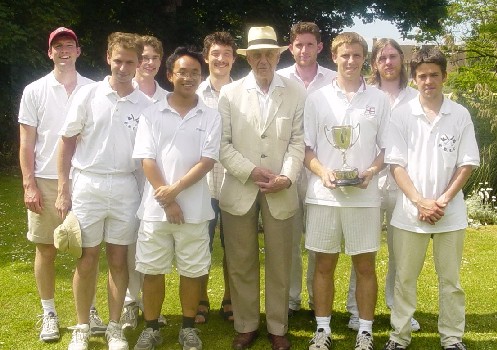 The 2005 UK Croquet Association Student Championships were held on June 18-19 in the University Parks, Oxford. The tournament was hosted by Oxford University Croquet Club and had a broad representation of teams and competitors from across the UK and Ireland. With temperatures reaching 28° C, sun burns all around, and quick sandwiches gobbled up between shots, we had two excellent days of play.

The individual championship was won by Marcus Evans from Nottingham University, with a perfect 5-0 record against a tough field of competitors. In second place was Eugene Chang from Imperial College, who won close matches against Chris Hansen, Sam Mooring and Andrew Cottrell to set up the final with Marcus.

In the team championships, Oxford A defended the team title against Trinity College Dublin after defeating the team from Imperial in the semi-finals.

Many thanks go out to Alan Oldham from the CA, who was on hand to present the individual and team trophies.

Participants are listed below: