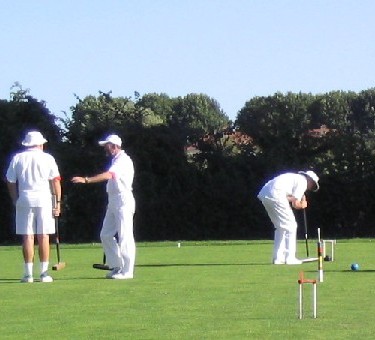 This year the English National Golf Croquet Doubles Championship was for a whole weekend (rather than a single day) and, furthermore, without any qualification rounds. As a result, the number and quality of pairs appears to have increased, providing a substantial challenge to all. The entry covered some pairs in very strong contention for the title all the way down to some novice players who gained valuable experience from playing in such exulted company.

Unfortunately, the final number of pairs was 15, which meant an unequal division into two, all play all blocks for the first day of play. With games played to a time limit of 55 minutes, draws in the block stages were possible (after playing eight strokes after the calling of time). At the end of play Saturday, the first round block results determined who would then play in the winners and losers blocks on the Sunday. The top four from each block played in the winners block.

Each block had a pair clear in first place. David Hopkins and Craig Oakley were top of the seven-team block, having won every game. In the eight-team block, Tim King and Roy Ware had a very solid first day, winning six out of seven games and drawing the other.

When moving to the Sunday blocks, each pair took forward their results against those other pairs that went into the same block (easier to experience than to explain!). These results replaced the need to play those pairs again and, thus, the games on Sunday were just against the qualifiers from the other Saturday block. On this basis, the block leaders were already in a good position to qualify for the semi-finals. However, some competitive games took place on the Sunday.

The semi-final between the first and fourth-placed pairs saw David Hopkins and Craig Oakley take an easy victory over Dick Strover and Jack Wicks (interestingly pitching two "old head and young blood" pairs against each other). The other semi-final, between the second and third-placed pairs, was a crunch match because Tim King and Roy Ware and opponents Shane Davis and Nelson Morrow had drawn 6-6 on time in the winners block. In the re-match, Tim and Roy eased to a 6-4 lead. However, they then met dogged resistance and failed to close out the game on both the eleventh and twelfth hoops. Thus, a nervy thirteenth hoop ensued but Tim and Roy had just enough gas to get past the line.

The presence of David Hopkins and Craig Oakley in the final was no surprise in that they had won every previous game over the weekend, including a 7-5 victory over Tim King and Roy Ware in the winners' block. The format for the final was slightly different in that instead of the conventional best of thirteen hoops, a two-hoops ahead requirement was added if the scores were level after the twelfth hoop (the nineteenth hoop being a decider if necessary). In the end, Tim and Roy achieved enough control of the final so that there was never any prospect of getting to the thirteenth hoop. Craig continued to play with the aggressive intent that had led to success for the rest of the weekend. However, he appeared to lose a slight edge and missed one or two crucial clearances. Tim and Roy improved on their earlier Sunday performances (having lost also to the Sheen brothers) and secured a 7-3 victory. This was a tough experience for the losers who had been so consistent previously over the weekend but crucially Tim and Roy won the games that mattered to take home The Ranelagh Cups. This success adds to them being the reigning Open Doubles champions, giving them two victories out of two as a pairing.