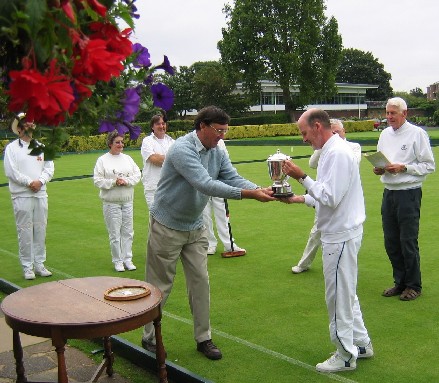 Sixteen players met at Roehampton for the All England Handicap Championship final on 17/18 September. With one of the main group of three lawns out of action due to overrunning returfing work, a pair of tennis courts had been hastily converted into a croquet lawn. Together with the normal fourth lawn located in a picturesque walled garden, the action was scattered over a larger area than usual, necessitating the provision of walkie-talkies to allow referees to be summoned when required!

A six-round Swiss with 3-hour time limits was shortened to five rounds when the third round on Saturday lasted well into the September twilight. The fifth round saw Chris Marshall, on home turf, fail to help the manager by winning his fifth game, instead losing heavily to an inspired Malcolm Daines of Huddersfield. This resulted in a three-way tie on four wins between these two and Pierre Beaudry of Dulwich, which was won by Malcolm. Both Malcolm and Chris suffered savage reductions to their handicaps as a reward for their good play!

In the picture: Malcolm Daines (Huddersfield Syngenta) being presented with the All England Handicap Championship Trophy by Nigel Aspinall.