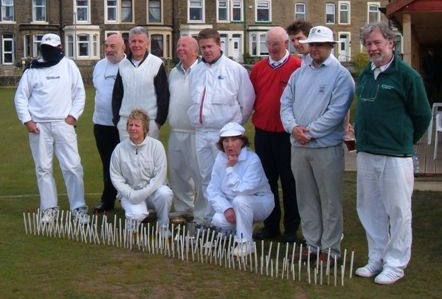 David Maugham with 10 of the 12 vanquished oppos. He pulled 129 bisques (David Turner)

"It doesn't seem right without John Beech"
Peter Wilson said, stepping into the breach.
His comments were echoed by all of us there.
"Best wishes to you John" We would all like to share.

John Beech is Pendle and always has been,
Ever since he came on the "Croquet Scene"
John's not the type for resting or napping,
If one played a good shot, John was laughing and clapping.

The tournament started after lunch on Friday,
And soon we were all out there ready to play,
From the Edinburgh club Martin and James did arrive,
Bringing the average age down to just thirty-five.

We all arrived feeling fit and on form,
Some of us had to play David Maugham.
Each in turn with our fence of bisques,
We tried to outsmart him and took great risks.

The first ball went round with some gay abandon,
But with David there, we had no leg to stand on.
Some of us took our first ball to rover.
When David hit in, the game was all over.

Andrew Web came closest to being the winner,
Only two years ago, he was just a beginner.
With one ball pegged out, the other on stick.
He thought to himself, " I will finish this game quick"

His half a bisque left, he used to hit-in.
Just a short take off and then hit the pin.
A deathly hush-------then we heard David shout,
" You can't use half a bisque to peg out"

Most of the weekend, David sat in his chair,
Pulling out bisques for everyone there.
At the end of the tournament all of them gone.
They all added up making one three one (131)

The games were un-timed which we found was not taxing
And when we were playing, it was much more relaxing.
When our games were finished and the bell rang for tea.
Some stayed to build Sand Castles, out on lawn three.

It wouldn't be Pendle without the great food.
Left nothing on my plate, didn't like to be rude.
For the lunches and teas, I never was late.
So now I've come home a stone overweight.

The weekend was fun from beginning to end,
With a Sunday night dinner to round off the weekend.
The food was delicious; the wine was divine.
The "Old Stone Trough" is a great place to dine.

Each of us had a story to be told.
Some of us told jokes a hundred years old.
The Tournament Managers could not have been sweeter
Thank you so much Liz Wilson and Peter!