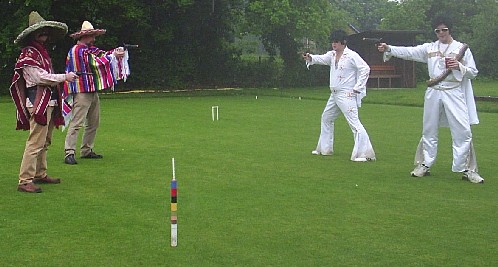 Shoot out at the peg (Photo: Gina Lewis)

The manager was absent from this year's tournament. Getting married was a reasonable excuse so we forgave Samir and his new wife, Anna Noble (George's daughter), for depriving us of his services. They more than made up for it by providing a superb curry - a sort of up-market take-away for 150 people - at the club on Saturday evening. It was great to see bus-loads of sari-clad ladies from India, Tanzania, Fiji and elsewhere trying side-style croquet shots.

In the Speed Doubles tournament we had 12 pairs, playing 11 rounds of 14-point handicap doubles (Samir decided 7/26ths of the handicap difference was appropriate....) with 25 minutes each side, displayed on giant chess clocks.

Team colours are encouraged and some took this a stage further - for instance we had a pair of Mexican bandits. But the plaudits for dressing up went to Chris 'Elvis' Patmore and Chris 'Elvis' Farthing, complete with wigs and a guitar [test: what is the plural of Elvis - Elvi? Elvii?
Elvises? Elves?].

In most croquet tournaments play gets better through the weekend. Not so speed doubles. Aching joints and muscles took their toll, as did beer between each round. This year's wind, rain and heavy courts made it even worse.

However, two pairs dominated the block, each winning 10 of their 11
games: Gina Lewis + Philip Eardley and Avril Machiavelli + yours truly.
Gina and 'Fingers' had already thrice won this tournament, now in its 10th year. Avril is a newcomer to the game, a product from the Blewbury academy and under the expert tutelage of the Brigadier. Her 16 handicap is a travesty and she WILL win many handicap tournaments soon. You read it here first.

In the final the two pairs played against each other again and it was a real crowd pleaser. It had everything: brilliant shooting, fluky peels, referee calls for contested wiring lifts and hoop faults, a peg-out, time called. But Gina and Phil triumphed, winning the trophy for the fourth time. Then we all went home for a long soak in a hot bath.