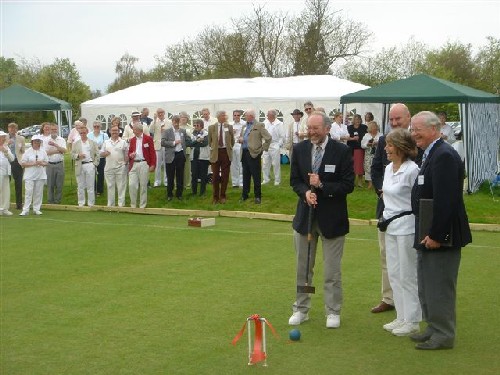 On Saturday 6 May Letchworth welcomed Dr Ian Vincent, Chairman of the Croquet Association, to declare open their two new lawns at a location shared with Letchworth Tennis Club. Seventy-odd members, partners and guests celebrated the occasion, and a very happy day was enjoyed by all.

Letchworth have been pursuing for some years the possibility of a move from their site at Willian Way, with undersized lawns and inadequate facilities, and are therefore delighted to be settled in their new home at last. A key factor has been the rapid expansion in membership to around sixty in recent years, mainly due to the popularity of golf croquet. Well-supported fundraising enabled the Club to provide about £11,000 towards the project, while £1,000 was gratefully received from the Croquet Association and another £10,000 from the Letchworth Garden City Heritage Foundation (a unique charitable organisation which controls the town). Sharing a home with the Tennis Club, itself a new £2 million project only opened last year, will allow members to take advantage of the superb new clubhouse, bar and changing rooms, and is expected to boost membership further.

The Letchworth Club was formed in 1987, with tremendous support from Judy Anderson, a member of Wrest Park Club and at that time Secretary of the East Anglian Croquet Federation. Members were therefore very pleased that Judy and her husband Tom, recently made Joint Presidents of the EACF, were able to attend the inauguration. Other croquet-playing guests included Patricia Duke-Cox, Chairman of the CA Development Committee, and the EACF Chairman and Secretary, David Kitson and Terrey Sparks respectively, as well as Ian Vincent himself.

Letchworth Club Chairman Andrea Carr opened proceedings on the great day, emphasising how much the Club owed to their President Duncan Hector, in particular for his organisation and preparation of the new lawns. Duncan in turn thanked the Letchworth Garden City Heritage Foundation and the Croquet Association for their generous grants, and paid tribute to members' efforts both in fundraising and in contributing in so many ways to the success of the club. His welcome to the guests was replied to by the Heritage Foundation's Director General, Stuart Kenny, who stressed the importance of sport to the local community. Duncan was then taken aback, but delighted, to be presented with a certificate granting him honorary life membership of the Club in recognition by members of all his services to it.

The Croquet Association Chairman successfully ran the ribbon-bedecked Hoop 1, from a suitable distance, to declare open the new lawns, with cheers all round. Guests participated in a "Nearest the peg" competition, happily won by Ian Vincent himself, after which all enjoyed an excellent lunch provided by the Club's active Social Committee.