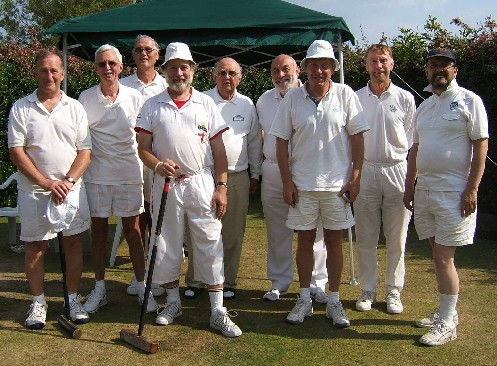 In a closely fought contest, 8 players, pacing themselves in sultry conditions, managed to provide some entertaining croquet.

The early leaders were David Turner (Tyneside) and David Millener (Belsay Hall) but by persistent play from Patrick and Roger Staples (Middlesbrough), the leaders were gradually hauled in. Roger collecting a bronze and then silver medal in his match against David Appleton gave him the impetus which rewarded him with the runner-up place. David Millener, playing his first CA tournament also qualified for a bronze medal. Patrick was well pleased with his achievement considering his last visit to Tyneside when he lost all his games!
The event was ably managed by Derek Trotman and lunches & teas were tastefully served by Sheila Watts and her ladies in waiting...