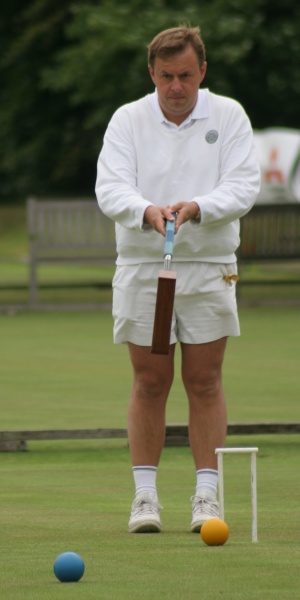 Bk supershot
R trickles to 2 yards east of Bk
Reg (Bu) from C1 just clips R and embarks on a 3-ball break and is just approaching 3.

Y has just made hoop 1 off read and has rushed red to east boundary. Bk is hoop 2 pioneer

12:30
Rob has set another sextuple leave with Bk in C3 and blue 2 yards NE of hoop 3. Reg misses the tea lady shot with Y into C3.

14:30
Rob has just missed a return roquet after 2-back having done 4 peels of a sextuple.
Reg has just made hoop 1

For the fifth successive game Bk has gone to the supershot position.

Rob (Y) to peg high on E boundary.
Reg hit yellow with Bu from C3. Now setting off on a 3-ball break

16:20
Reg has just missed a long peg out at the end of his quad and pegged black out. Reg's straight rover peel failed - blue seemed to come back out of the hoop. Reg cannoned the blue through with red but failed to get past blue and ended with a 10 yard peg out. Reg pegged black out

Rob went to take a contact but was stopped by Reg, because Rob was not entitled to one.
Rob is now taking yellow round on a 3-ball break.

16:40
Rob has just taken a ball (Y) round leaving blue just out of corner 3 (probably wired from the peg) and left himself a rush in corner 1
There is a big debate going on on whether Reg should have left black on the lawn.
Reg has not taken the shot, but has put blue into C4

16:55
Rob got as far as hoop 3 and laid up on E boundary.
Reg missed the peg from near C2 and missed Y.
Rob has a hampered shot after 3 which he hit.
Now has a 3-ball break. Slightly awkward approach to 4 leaving a longish angled hoop, which he runs easily. Now has a standard 3-ball break to finish.

After three days of block play, 24 players qualified for the knockout section, seeds 1-5 were in order and 6-8 were drawn at random.