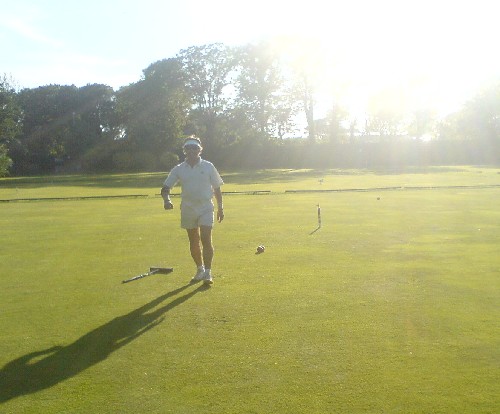 Slow courts and easy hoops still led to some interesting play: in the morning, Jack Davies played a wrong ball before 6, letting Dave Kibble go round with two POPs but he missed a 2-foot straight rush when making the leave and Rutger TPOd with 2 balls off (6 vs. 1). Goat had difficulty getting position on the slow lawn, but Jack was very accurate - Goat caught up and got as far as a shot at the peg from behind Rover, but Jack was there ready to finish the game.

Paul Castell didn't handle his pegged-out game well and ended up giving Louise the balls at 1-back - she had a squeeze and he shot, clanging off 1-back.

In the afternoon, following an excellent lunch, Goacher found himself centre stage when he failed his TP in the deciding game by the Rover peelee hitting a wire deflecting striker's ball round the side of the hoop but making the hoop itself off the rebound. Rutger went round with a good hoop leave, but Goacher missed anyway. Rutger had the TP under control with the Rover peel jawsed on the way to 3-back but the casual rush to 3-back ended in the death position. He took off for a very angled hoop with the reception ball partly in the jaws - the jump ended on the North boundary - he hit his 4-back pioneer, but that ended down by Rover. So a ball in Rover and one on the wire of 3-back meant he needed some good shots, which he played well - he ran a long 4-back off partner with a good penult pioneer. Unfortunately, in a moment of madness, he dribbled at the 3-yard shot and hilled off. Goat finished, but not without making a big deal of pegging out into the sun!