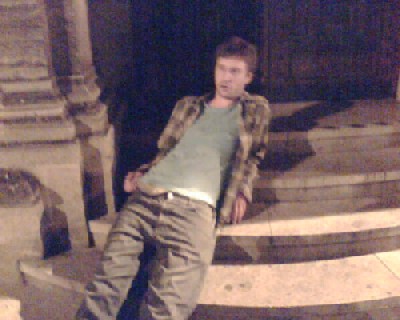 Russell on the steps of the Bodleian: How did Russell end up with a fat lip? (Picture: Samir Patel)

The number of players at the tournament varied through-out. 5 players came down for the Friday evening to get some early games. 17 players were present at one point on Saturday, until Robin left to spend time with his kids, and Bryan left to attend to collegiate duties. Neither player was able to return on Sunday, but Kevin joined us again having played on Friday and taken leave on Saturday. The manager also took left early Saturday evening, leaving Donkey (aka David Follows) running the show. Confusing for the management, but fun nonetheless!

The sun shone brightly all weekend. Despite the grass being about 3/4'' long and a vibrant green colour, most players struggled with the fast conditions (Should have measured it but didn't!). And despite the hoops being set to the generous side of 1/8'', most players struggled with the very firm hoops. The mild slope on the cricket outfield used didn't help much either. More than a third of games were reduced to single figure margins. Time-limits were at the players discretion leading to some long games, but a reduced number going to time!

Mark G came closest to a triple, doing 3 peels but failing the peg out. Austin S-J put in some valiant attempts to claim the free beer for the peeling prize. In the end, Russell paid for and drank the last beer.

Ratio of 7 spectators per player! This occurred as Mark G set out the lawns Friday afternoon. The spectators left when the croquet started.
Although the prominent position in the university parks meant that small numbers of people stopped to watch through-out the tournament.

Bryan and Denis declaring a draw when Bryan had to leave for collegiate duties. Bryan wished to concede, despite being ahead. Denis, being the gentleman that he is, refused to take this as a victory and they agreed to a draw.

Donkey conceding his first lift of the tournament Sunday afternoon (in his first game of the day). Donkey who is teaching at Winchester has only spent time coaching the pupils at the school this year. While he struggled to find his game, he helped achieve some of the highest scores of the tournament.

Russell's fat lip on Sunday - where did it come from?

Kevin Carter in a discussion on the sensuality of croquet informed us that he "swings both ways". This lead to a further discussion of the CA publishing committees contingency plans for when (or should that be "if") ["when". Ed.] they get sued for liable as a result of a tournament report....