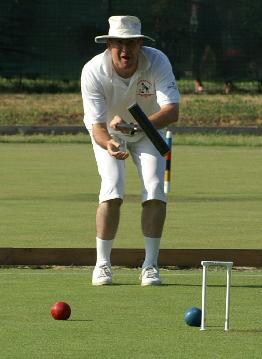 The 2006 Italian Open attracted a record entry of 20 players from 10 countries. This might have been stretching the international flavour slightly, since the Luxembourg and Uruguayan entries seemed to have strong English roots but unquestionably there were representatives from South Africa, Belgium, France, Ireland, Scotland, England, Sweden and the home country.

Initially there were four blocks of five players and the organisers bravely decided to use a best of three format for the block matches, which meant that a minimum of 80 and maximum of 120 games would have to be played on three lawns in one day. The prospects of achieving this deteriorated somewhat when the start of play was delayed by some 30 minutes. However, by the time play stopped at around 8pm when it was getting quite dark (and perhaps more importantly, threatening the start of the gala dinner), 39 of the 40 matches were complete. The remaining match was rescheduled for an 8am start the next day. All of the block winners were English which raised hopes of a success to offset the recent minor disappointment in the World Cup.

Sunday proved to be another hot day, taxing the endurance of even these highly tuned sportspeople close to their limits. The courts are adjacent to a large swimming pool complex which was understandably popular with local young people. Croquet players often took refuge from the heat under the trees that separated the two areas and coincidentally offered a fine vantage point of the scantily clad bodies. However, by late on Sunday as a gripping final unfolded it was the Italian locals in swimming costumes that gazed intently over the fence at the croquet duellists.

In the semi-finals Bill Arliss was set against the local champion, Gianpietro Donati, while Tim King took on Swedish superstar Anton Varnas. Bill shocked the Italian by romping to a 4-0 lead, only to see it evaporate to 4-4 before clinching a tense final hoop at 7-6. In the second game Donati piled on the pressure and won by 7-5 . After many hours in the sun Bill seemed to be flagging but he kept on fighting and won the final game 7-4 .

While Bill and Gianpietro had played three fast paced games, Tim and Anton were still in the middle of the second, despite starting earlier.

Tim had taken the first game reasonably comfortably; Anton's superb clearance shots were offset by inconsistency in front of hoop.

Eventually Tim prevailed in the second game to set up an all English final, leading to an exodus by some of the local spectators.

The aggressive style of both players resulted in the final being played at a brisk pace and witnessed numerous spectacular clearances, enthusiastically approved by some of the spectators. Tim raced to a 5-1 lead in the first game but then visibly eased back, allowing Bill to regain confidence. Although Tim eventually won by 7-3 it seemed likely that the next game would be closer and so it proved.

Bill's improved form over the weekend was largely due to more reliability in front of hoops. In place of the old Arliss full power drive we are now seeing a delicate tap, which is certainly good news for the hoop setters! Bill gained a narrow advantage initially in the second game but Tim responded strongly to go 6-5 up. Bill gained control of hoop 12 and tried to set up the rush back to 13, whereupon Tim engineered a legitimate shot of blue into corner 3. Bill cannily played for time and Tim avoided (rightly) the temptation to peel yellow through with black. Ultimately, Tim managed to get both balls to runnable positions in front of 13 and Bill needed to clear from the boundary - a shot with which he typically has at least 75% accuracy. But not this time. So Tim King was crowned as the very worthy champion while Bill could take solace in the improvement in his ranking and a not inconsiderable share of the prize money.

Mention should also be made of two other players. Richard Thompson has developed an unusual and not universally popular method of lining up his shots but it is certainly effective and he achieved a fine 5th place finish. Jane Shorten won the Plate competition, beating a less than gallant Italian in the final.

Overall, this was a most enjoyable event. Our Italian hosts never panicked when the timetable seemed to be falling apart, the hospitality was generous and the standard of croquet was consistently high.