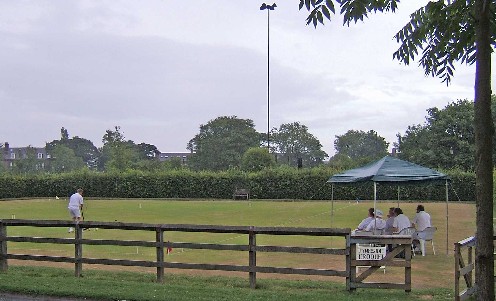 After going round to 1-back, Maugham left Nick's balls cross wired at hoop 1, Dave Nick elected to try his luck with a jump shot over the hoop which missed, leaving Maugham to carry on and win the game by completing his third sextuple.

The weather was hot and humid finishing with rain which also saved itself for the final!

The tournament was a well run event by Manager Maugham, there were 3 sextuples and 4 triples, a "cross wire" where the hoop was run to make a roquet! and excellent lunches & teas served by Sheila Watts. The players enjoyed the Saturday evening out a local hostelry in Gosforth Park.

Martin Stephenson from 5 to 6