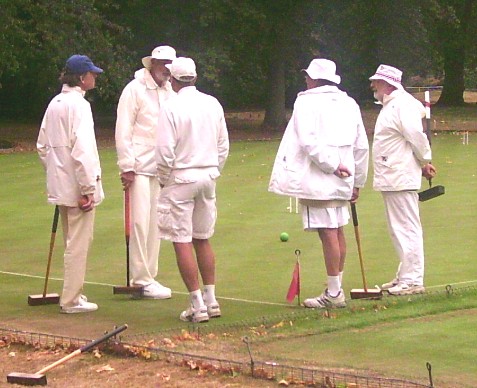 In the Class Event, The Hurlingham Cup was won by Jerry Guest (Hurlingham) who beat Jeff Dawson (Woking) in the last (deciding) round of the American block of 10 to take the cup with Jeff as the Runner Up.

The Turner Cup was won by Ian Parkinson (Watford) with Richard Hoskyns (Hurlingham) as runner up.

The Younger Cup was won by Farooq Malik (Dulwich) with Jolyon Kay (Blewbury) as runner up.

The Longworth Cup (handicap) was won by Abel Hadden (Hurlingham) with Neil Coote (Reigate Priory) as runner up.

The Centenary Salvers (Handicap Mixed Doubles) were won by Colin Dalziel and Christine Osmond (Surbiton) with Nelson Morrow (Hurlingham) and Sue Strong (Surbiton) as runners up.

The Wine Coolers (Men's handicap doubles) were won by David Ruscombe-King (Surbiton) and Peter Spiller (Hurlingham) with Geoffrey Cuttle and Michael Holland (Woking) as runners up.

The Candlesticks (Ladies' handicap doubles) were won by Mary Knapp and Sue Strong with Jean Oades and Lilian Schayek (Roehampton) as runners up.