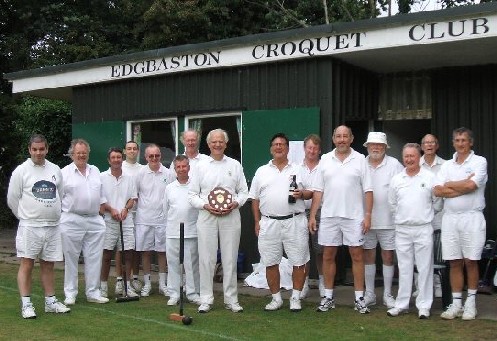 Following torrential rain on Friday, the lawns started a bit squidgy, but dried quickly to an easy pace. We were fortunate to have very little rain over the weekend.

The tournament was restricted to handicaps between -1/2 and 3. This seemed a popular idea, as the tournament was over-subscribed. Most games were competitive, and indeed of the four minus players, only Kevin Carter was in contention at the end of Saturday.

He faced Paul Swaffield on Sunday morning. Paul, emboldened by two triple peels on Saturday, tried a TPO, but was fatally hampered after 1-back. So the key game on Sunday afternoon was Carter v Granger Brown. I missed the opening, but I saw Martin's clip on 2-back with Kevin going round to 4-back. Kevin attempted a diagonal spread, but failed the wiring and left a target of ball by peg and his own two balls. Martin duly punished this, and made two hoops with the forward ball and a strong leave. Kevin took an aggressive shot, leaving Martin an easy break, which he took peellessly to the peg. Kevin missed, Martin finished. Meanwhile, the only other player with one loss was Bill Sidebottom, but he lost to Ian Parkinson (who gained the prize for most brownie points). This left Martin a clear winner. Martin was steady and solid as ever - only Daniel Mills scored more than 9 points against him.

It was good to see some players new to Edgbaston, including Jonathan Lamb from Montevideo. Even better to see some old faces, especially Peter Dorke returning to tournament play after many (20?) years. Sadly he was in competition for the Wooden Spoon, with the key game being against Ken Jones. Ken pegged out Peter with Peter's other clip was on 4-back, Ken's on 3. For reasons of space, and tact, I will not give the ball-by-ball commentary, but Ken won by 2.