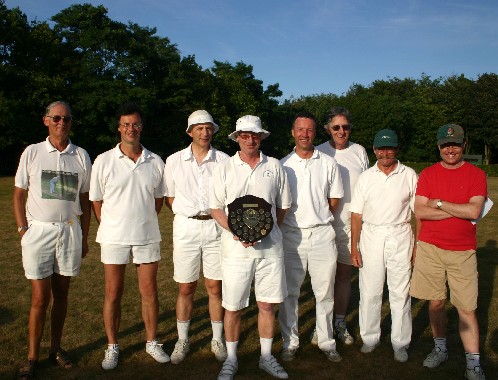 A hot weekend and parched, super-fast, straw-coloured courts presented a real challenge to competitors. As a consequence, rather more games than expected ran to time. Three late withdrawals for medical and personal reasons reduced the number of players from the anticipated maximum of 12 to only nine, with handicaps ranging from 2 to 10.

In the end, victory fell to John Spiers (Blewbury) with a solid 6 wins out of 6. John Male (Caterham) was runner-up, with 5 wins out of 6. Special mention must be made of Mark Godfrey (Guildford and Godalming) who, with a handicap of 10, was entering his first advanced tournament and finished with a very creditable record of 3 wins out of 5.

The Frank Rendall Trophy, inaugurated this year in memory of a long-standing and much respected member of the club, was presented by a very frustrated club chairman, who had had to withdraw from competition on the grounds of having only one arm working (deemed by some to be a poor excuse!)