Tales from the Vienna Hoops 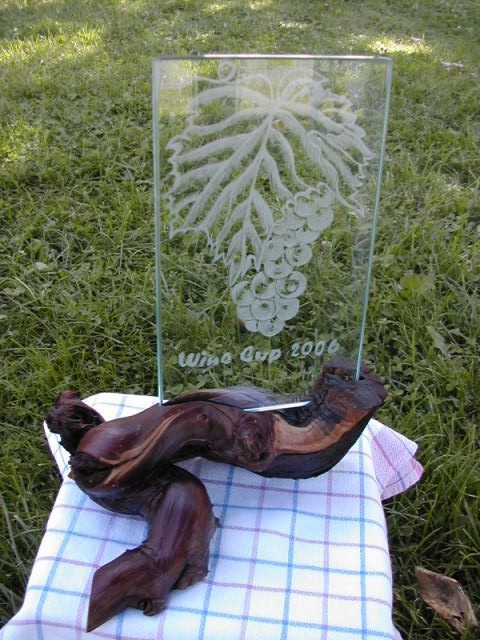 The third 'Wine Cup', held this year between 1st & 3rd September, is Austria's Open Championship. However, its participants discovered that their trip to Vienna was more than just a tournament; it was a most enjoyable croquet-based holiday.

Heinz Hackl, his wife, Sabine, and several members of the Wolkersdorf club work tirelessly to ensure that the tournament is a success - not only for the players but also for croquet in Austria, which is now an up-and-coming croquet nation with many improving players.

The drama began before the first ball was struck, when William Ormerod arrived from the airport having picked up the wrong suitcase. While many of us would have liked to see him play in pink tights and frilly top he instead went off to the sports shop to replace his missing whites.

Heinz warns all that "This is not Hurlingham" but the club is inching towards his ideal and many clubs in England would be pleased with the playing surface and facilities. The two courts were easy-paced after recent rain but ROT Charles Jones ensured the hoops were set very firmly to provide enough of a challenge.

The first block saw Kevin Carter go through unbeaten to the semi-finals, with Charles scrapping it out for second place. The second block included the hot favourite to win, Tony le Moignan. However, Tony dropped a game to the top Austrian player, Klaus Gollhofer, who picked up a three ball break and completed after Tony had pegged out his first ball. However, Tony still headed the block. John Cosier, who always plays well in Wolkersdorf (2nd in 2004, winner in 2005), filled second spot.

In the semis John fell to Kevin 2-0 and Charles to Tony with the same match score. The highlight of the third of the three days was to be the best-of-three final and Heinz had to balance the schedule to provide the players enough time against the wishes of the club to provide a spectacle for the knowledgeable crowd, the press and the mayor, who came for the prize giving.

When Tony clinically took the first game 26TP it looked as though there would be an early finish. Even more so when he began the second in the same vein, but blobbing six let in his opponent, who went round and pegged-out Tony's forward ball. There was then a 2 balls vs. 1 cat-and-mouse game which lasted until Tony hit a quarter of a ball, not quite behind a hoop, from 25 yards. And so he completed his thoroughly well-deserved victory to take the handsome trophy.

Third-place play-off went to Charles and Leopold Waldorf won the consolation event, run as an Egyptian Handicap. This brings us to the question of handicaps. The local players gave us a great time, and all we visitors repaid them was to suggest that their handicaps be slashed across the board, by about 20% each, to bring them into line with the English system!

Our Viennese holiday was about more than just croquet. Heinz and his friends laid on a complete programme of events, meals and sightseeing.
For instance, on the Monday following the tournament we visited the Hapsburg palace at Schonbrunn, enjoyed a city tour and then had tickets for a Mozart concert at the famous Musikverein. Earlier in the weekend there was a Gala Dinner at an incredibly kitsch restaurant, which is said to have been the favourite haunt of Emperor Franz Josef.

This was a memorable visit to Vienna, not only because the Wine Cup goes from strength to strength, but also because we saw evidence of Austrian croquet going in the same direction, largely because of it (for instance one national newspaper printed a large colour photo with an explanation of this "Very British Game"). Austria now has a score of players and we can clearly identify at least three who have the potential to soon reach A-class.