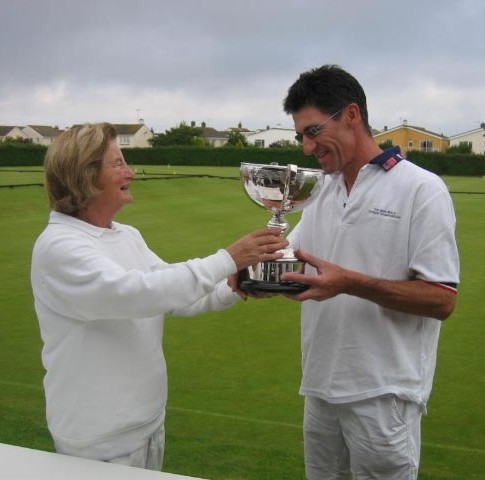 High standard match with two fifth turn triples seeing the score 1-1. Lemon took the third +25 and in the fourth Lemon went to 4-back, Mulliner hit the lift and laid for a sextuple but Lemon then hit the tea-lady and completed his TP.

Other Things of Note

Gerard Healy met the young Czech player first round on the first morning. Gerard plays the brown ball onto the lawn and David, through his interpreter, asks which two of the remaining three balls were his. A great intro to European croquet for Gerard and we now know the Czechs only play primary colours and therefore only ever single bank.

One European player wasn't sure of the lift/contact rules and laid up diagonals every time he went to 4 back as he was too embarrassed to ask oppo.

The same player had also forgotten there was no such thing as a draw and having pegged out Phil Cordingley and having drawn level in the final turn of the match, he then decides he might as well take a full lawn pot shot at Phil's ball on A baulk as he could then take off to 4-back to win. Imagine his surprise when Phil gets another turn with oppo ball next to him and needing 3-back. Phil wins +1T.

The annual real ale/cider festival went down a treat on Thursday night although conversation had slumped into some kind of multi national babble by pick-up time.

The final started at around 11:00 with a SuperShot opening from Stephen leading to fifth-turn finish in the first game little more than 30 minutes later after Tony missed his lift against the dream leave into corner IV. Stephen +26tp.

In the second game, Tony chose to go first, and went to 4-back third turn after another supershot, leaving three balls near west boundary, which Stephen missed into corner II. Tony seemed to get the balls too close together, and ended up making hoop 1 off opponent, with the hoop 2 pioneer only a couple of yards off the boundary. However, he completed the delayed TP with little fuss. Tony +26tp.

The third game after a lunch break, saw the only error of the match, with Stephen getting hampered after hoop 1 after hitting his lift. Tony never got going on his TP, and finally laid up with an OSL. Stephen missed and Tony finished. Tony +25.

The match then paused for a media break, which seemed to involve what must be standard sports interview questions, such as to Tony "how do you feel at the moment". A. "I feel like I would have prefered a best of three".

In the fourth game (now single-banked after the 3rd/4th place play-off was moved to another lawn), Tony once again got going first on fifth turn. Stephen hit and went to 1-back with a tea-lady. (He said that he didn't want Tony to have a low-pressure shot to win with his backward ball.) Tony instead hit the tea-lady, and completed his standard TP without little hassle (although he said it didn't feel like that on the lawn).