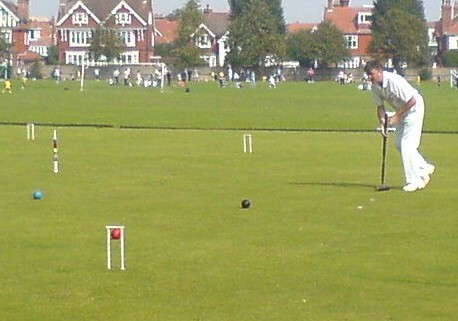 Tudor vs. Aiton was the pick of the first round matches:
Game 1: Tudor TPO'ed Aiton 4th turn. Keith had squeeze. Tudor missed from hoop 2 with hoop 1 ball. Keith finished. +14OTP

Game 3: Tudor to 4b 2nd turn, balls just out of corners II & IV. Keith hit partner in corner 4, miss-approached hoop 1 shot at the corner II ball, missed. Stabber got to 2b & 4b on 4th turn. Keith finished in two turns, +11TP

Game 1: Duckworth against Wicks. Duck won +26TP 6th turn, after a 'NICE!' opening. Wicks chose to go in, Ed chose Blue & Black. So Wicks laid a supershot with Black, then placed Red on the end of B-baulk. Duck manufactured a standard duffer opening, Wicks then missed the duffer, running Penult off the south boundary.

Kibble beat Daniels -8, +2TP, +26TP
Game 2: Kibble was seconds from going out but Daniels failed a straight rover peel, giving Kibble all the balls to win in 2 turns.

Death beat Trimmer +18QP, +2STP
Game 2: Death had a 3 ball STP after Trimmer had pegged out one ball with his other for Rover.

Aiton beat Patmore -26TP, +26TP, +26TP
Corner 3 openings in games 1 & 2. Dispute in game 2 about whose mallet was a yard long. Keith's is bigger than Patmore's, however Patmore's is the correct size. *shrug*

Maugham beat Magee +26TP, -13OTP, +17TP
Game 2: Beast ran hoop 1 with Magee's ball in corner II. Beast 'christed off' reception ball, played large roll putting a ball to 3 going to Magee's ball. Whilst playing the stroke he done some 'head shit' on himself and managed to put the striker's ball off and give Magee a rush to the ball at hoop 3. Magee won in 2 turns.

Conditions are very easy. Hoops putting up little to no resistance.

Aiton beat Death 2-1 to reach the final, Maugham beat Farthing 2-1 in the other semi.