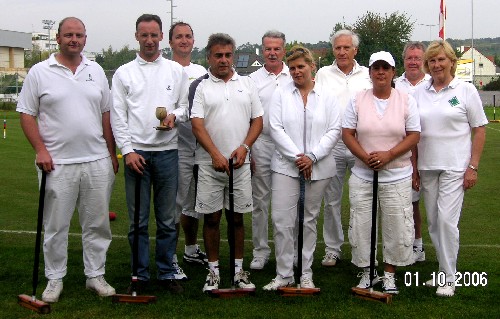 William Ormerod donated a marble stone cup to the Austrian Croquet who decided, with William's agreement, that the Golf Croquet National Championship will be called the William Ormerod Trophy.

On the weekend of the 1st of October, the first ever Austrian National Golf Croquet Championship took place in the croquet club in Wolkersdorf, near Vienna.

Ten participants fought tough matches in a single round-robin, single 13-point games, with the two top placed in a best of three final. The weather was sunny and warm, on very fast lawns, the very firm hoops were set to 1/16" of an inch.

One of the favourites, Klaus Gollhofer, who is within the top 20 in the World Ranking, made it into the final without loosing a single game. The other finalist was Leopold Walderdorff, who was the plate winner of the Wold Championship 2006. Although he was expected to be the second finalist, he lost a game to Klaus and another game 7:6 to Heinz Hackl, who played very well and ended up being third.

On the final day, Leopold showed some very good shooting and fantastic hoop running. In the final Klaus struggled a bit with his shooting and so Leopold could take the title in two games, 7:6, 7:4

The plate was organised as an Egyptian and won in some very good games by Gerhard Obermayer, who started playing just a year ago. He is probably one of the biggest upcoming talents in the Croquetclub Wolkersdorf.

All details of this and other tournaments can be seen on www.croquet.at/