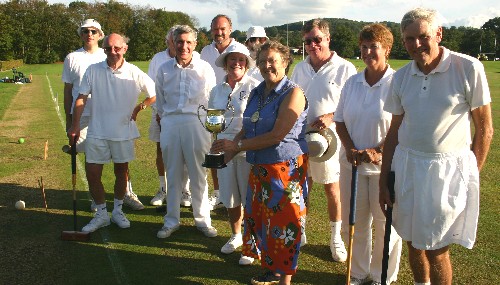 The Mayor of Guildford, Councillor Angela Gunning with competitors

In what, despite the presence of the remains of Hurricane Gordon in the western approaches, turned out to be glorious weather, 10 stalwarts ranging in handicap from 8 to 20, competed for the Chapman Challenge Cup. The Bray system was used to shorten some of the games, with the result that only 5 ran to time. Competitors cane from far and wide: Hunstanton, Ramsgate and Ryde, as well as more local clubs.

The Mayor of Guildford, Councillor Angela Gunning, paid the club a visit on the Saturday afternoon. We think she enjoyed herself. Having promised her husband that she would be home by 5.30pm, she was still at the club at 6.15!

The manager's special award went to Patricia Duke-Cox for a thrilling come-back in her 4th game, with opponent on peg and peg. She made up a 16-point deficit to win +2