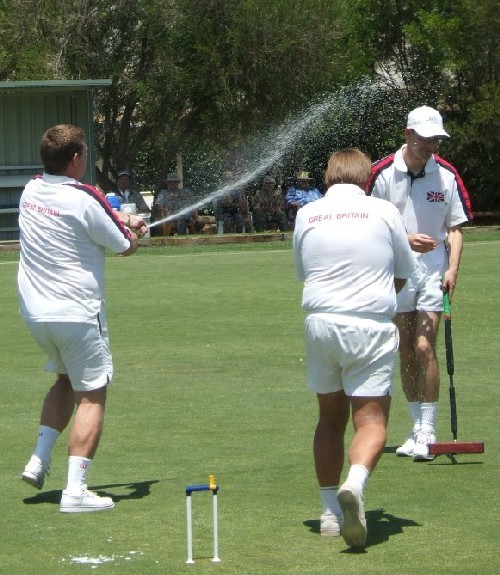 Great Britain sweeps the first series of singles 6-0 to clinch retention of MacRobertson Shield with two days to spare, taking an overall 12-0 lead in the deciding test against hosts Australia. Two of the wins were flawless, two others emphatic, and in the final two the Australians made sufficient mistakes to let GB off the hook when they did give chances.

Although we had high hopes of clinching today, the need to guard against complacency meant that, with one exception, there was no excessive talk of victory the night before. That pretty much changed two minutes into play as in two of the six first games GB had breaks for 3rd turn balls round, and for 4th turn balls in the other four. And so it continued. Five of the six breaks made it to 4b. Trust the Muppet to spoil the clean sweep, not getting there until the 6th. Indeed it was forty minutes into play before any Australian scored a point. From this point then it was a question of who was going to get the winning point.

David Maugham and Chris Clarke blew their chances comprehensively by finishing almost simultaneously in 90 minutes in 13 turns each, to make the score 8-0. Robert Fulford would have been up there with them but, playing Martin Clarke in the sandpit , he encountered trouble at 2b when on a finishing 5th turn triple in the second. He completed the victory for 9-0 next turn when Martin missed his 6 yarder from A baulk. Mark Avery overcame limited resistance from Trevor Basset to get away with his errors and ultimately scramble the first. But Mark then slipped into top gear to blow Trevor away in the second with a 5th turn triple. At this point we lay 'dormie' (as it were), being 10-0 up by 11:00am.

Which meant provided they could muster a win between them, the honour of scoring the magical 11th point would fall to one of the rookies. Keith Aiton came out of the blocks so quickly it looked more likely he would put the first point of the day on the board, let alone the 5th. He won the first against Ian Demergue on the bowling green with a 5th turn triple, no croquet, and went to 4b on the 2nd turn of the second game after hitting Ian's supershot ball. Despite Ian hitting on the third turn, with visions of a nine turn match win in sight, Keith unfortunately croqueted off the lawn with good finishing chances on the 4th turn. Whether as a result of anticlimax or not, this game then got relatively bogged down, leaving Jonathan Kirby with every chance of snagging the winner in his match against Stephen Forster. A dour struggle in the first was ultimately resolved when Stephen suffered a grievous on Jonathan's peg ball when laying up, his backward ball for penult. Jonathan gratefully hit the 9 yard lift and finished from rover. Inspired by news of progress from the Keith's match, Jonathan took first blood in the second by having a 3rd turn ball round. With an admirable sense of theatre, Stephen duly missed the lift, and the Kirbster embarked on a delayed triple for the ultimate prize. Meanwhile back on the bowling green Ian had had an equalising ball round but failed to get going with the second and surrendered the innings. Keith had a leave with his forward ball, Ian shot and missed. Keith embarked on his triple, so the race was well and truly on. For some reason, the smart money seemed to be on Keith, but nevertheless there formed a small posse running back and forth between the two lawns to monitor progress. Which was even, with Keith doing the penult peel after 6 with the Wylie method, at about the same time Jonathan was peeling 4b going to 6. Jonathan hit a good rush to 6, approached to 15 inches dead in front, but got hampered trying to run it with control just as a gust of wind hit. He missed the consequent difficult roquet, leaving Keith to progress with regal ease to finish his triple and seize the 2006 MacRobertson Shield for Great Britain.

The team then repaired to Jonathan's lawn to watch him apply the coup de grace to seal an overnight 12-0 lead, being treated to a Champagne shower for his troubles from Fluffy and the Beast. The crate load of baboons has been returned unopened to London Zoo. It's conceivable we might do some celebrating tonight.

1) Robert lays ss
2) Martin goes to W boundary 6? S of II
3) Robert hits in II, goes to 4b with defensive leave
4) Martin misses from III into IV
5) Robert sacrifices good rush on escape ball after peeling penult after 6. Clips it, so can't get it to 2b. After 1b rushes partner to 2b, and sticks trying to run it with control after mediocre approach
6) Martin misses 6 yarder from A baulk
7) Robert finishes

1) David lays ss
2) Bruce goes to optimum position on E boundary
3) David hits from B baulk, goes to 4b with defensive leave
4) Bruce misses from B baulk into IV
5) David finishes

1) Bruce lays standard E boundary ball
2) David goes to II
3) Bruce hits partner from III, rolls to middle of E boundary leaving rush to 1
4) David misses from III into IV
5) Bruce makes 1, rushes to N boundary 4 yards E of II and takes off the lawn trying to get a rush in II
6) David goes to 4b with an MSL
7) Bruce misses long lift
8) David finishes

1) Ian lays ss
2) Keith hits and goes to 4b, leaving opponent ball just out of II and his ball just out of II
3) Ian hits in IV, takes off to ball in II landing just short of getting a rush to 1. Takes off to 5 feet in front of 1 but clangs
4) Keith clips ball at 1, makes it, but goes off lawn rolling to 3 and partner on N boundary behind 2
5) Ian misses partner in IV
6) Keith makes two, ???
7) Ian goes to 4b with a reverse spread
8) Keith misses long lift form A baulk into II
9) Ian runs hoop 1 but gets hampered and runs to III
10) Keith misses partner at 1 from II
11) Ian hits 9 yarder at partner in III from 3 and lays up near III with rush to 2, Keith's hoop 3 ball 2 yards SE 4, 4b ball just off middle of W boundary
12) Keith misses partner at 4 from W boundary into IV
13) Ian over-hits rush to 2, takes off to ball in IV but hits 4 and misses 9 yarder
14) Keith has 9 yarder at target in IV, but plays with 4b ball. Rolls opponent to 4, rushes partner through jaws of 3b to 5 yards S 4b. Rolls to II and puts opponent 4b ball to 3. Lays rush to 3 in II
15) Ian misses opponent in II from 3
16) Keith over hits rush to 3, over approaches, but runs good hoop. Jawses 4b peel going to escape ball 7 yards away. Does penult peel using Wylie method around 6. Puts 2b pioneer 2 yards SE of hoop and doesn't get rush on peelee after 1b. Rolls peelee to 3 yards S rover, plays good backward take off approach to 2b, and good stop shot after 2b getting ball all the way to 4b and rush on peelee to rover. Jawses rover peel from acute angle going to 3b. Over hits take off to 4b after completing peel, but plays good approach, running hoop to the boundary. Finishes