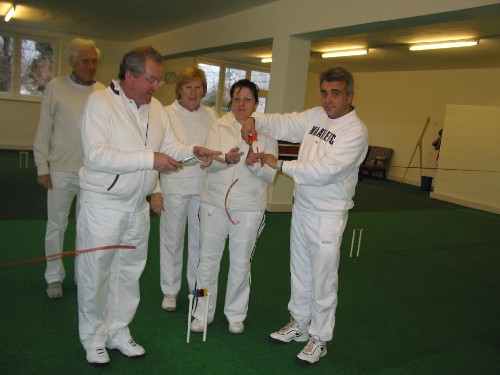 Normally, we are used to long and cold winters in Austria - that's perfect for winter sports like skiing but not at all for croquet!

When a new and quite enthusiastic member, Gerhard Obermayer, asked me "what will we do in winter?" I had to answer "tactical training, tactical training and tactical training!". That dialog was in early summer. Then he showed me his "old joiner's workshop" next to his house. When his company (he is a window maker) moved to an industrial area, this workshop isn't used any more.

Gerhard promised to adapt it for croquet - and he really did it! He bought a special grass carpet, we welded special hoops with a plate on the bottom, he changed the old windows to new ones with extra-low energy glass, made a new facade with perfect insulation, had installed a special blower heating system, made an extra entrance from the rear with an extra staircase and installed a special safety lock system. So each member got his own safety key which is also used to switch on the lights; i.e. we can play whenever we want!

A few weeks ago there was the "official" opening celebration. We all had been excited to try the first strokes - the court is much smaller (12,5 x 10 m), the surface very, very fast (even much faster than Surbiton in summer), there is a special obstacle in the middle - a pillar 40 x 40 cm. We called it "the big peg" which is in fact a bit off-centre and integrated it into the court.

The real challenge are the hoops. Though we got some very useful advise from Kevin Carter, Mike Town, Stephen Mulliner, et al. Gerhard used against all advice some PU-glue and screws to fix the hoops. Though the gap is 3 mm they are not difficult - they are cruel and unforgiving!

Anyway, it is great fun and we can keep on playing. As this court forces one to play very precisely, I am sure it will be helpful for the next summer season.

This indoor court is situated in Wolkersdorf (about 15 km north of Vienna) close to our outdoor court and in walking distance of the town centre and railway station.

Thanks to Roswitha and Gerhard who invested a lot of money and effort we are in the lucky position to be able to play our favourite sports the whole year. Just as tennis became an all season sport, now we have the same opportunity.

If croquet-players visit Vienna within the next few months, please do contact us - we are looking forward to some exciting matches.

And maybe there will be an International tournament next winter....

Merry Christmas and all the best for 2007.