Croquet goes to the races 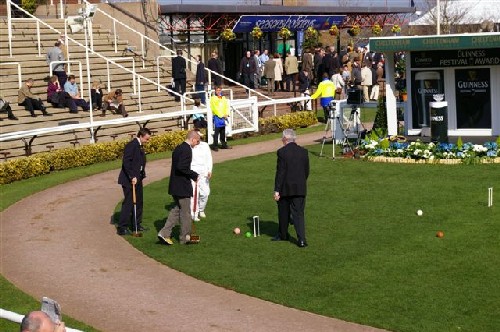 Anyone who has ever picked up a book on the history of Croquet will not have turned many pages before coming across a reference to Ireland. Anyone walking through Cheltenham between 13th and 16th March will know that it's impossible to go more than ten yards without being given a cheery greeting by someone from the Emerald Isle, as they make their way to Prestbury Park for the race meeting of the year.

It did not exactly take 'rocket science' to put the two events together, and this led me into the office of the Managing Director (Edward Gillespie) of Cheltenham Racecourse with request that he help promote Croquet.

The response was remarkable. A list of sporting journalists was handed over; an advertisement in the Racing Programme was offered; a croquet demonstration was arranged in the winner's enclosure; an information desk was set up next to the statue of Arkle; and the GB team were invited as VIP guests. Edward even had the area re-turfed and also managed to lay on perfect croquet weather!

To use a sporting vernacular, this was to be a day of "two halves". The day started with a breakfast briefing at Cheltenham Croquet Club complimented by some practical experience on the lawns, expertly supervised by David and Eileen Magee. The Journalists and broadcasters included Rolf Johnson of the Daily Express, John Inverdale from Radio Five Live and a film crew from ITN.

The media became so engrossed in the play that they had to almost be forcibly led to the transport which was waiting to take them to the Race Course for the second part of the day.

By the time the press arrived at the Race Course the croquet match between "Ireland" and "England" was in full swing. A hybrid cross between Association and Golf made an interesting, if somewhat puzzling spectacle to the croquet cognoscenti. The game was interlaced with various film crew and radio station representatives taking the opportunity to record the event.

Sue Edwards and Graham Roberts, from Cheltenham Croquet Club, led the International Sides; and the "punters" from around the parade ring were recruited to the teams. This led to some rather odd international qualifications, which certainly would not have been acceptable to the selection panels of either country. At one time the "Irish" team appeared to consist entirely of Yorkshire folk!

Some talent was certainly spotted. A snooker playing midlander appeared to have a natural affinity with the game and a lady from Kings Lynn did well, once the rules were changed to allow her two shots everyone else's one!

Meanwhile the great and the good from croquet, well Keith Aiton and Phil Cordingley, were live on air with John Inverdale.

There was a steady flow of people at the information desk. It was interesting to note the number of enquiries coming from people with their own lawns and/or sales enquiries. Some enquirers have been directed to their nearby club; and others were given the contact details for the CA shop.