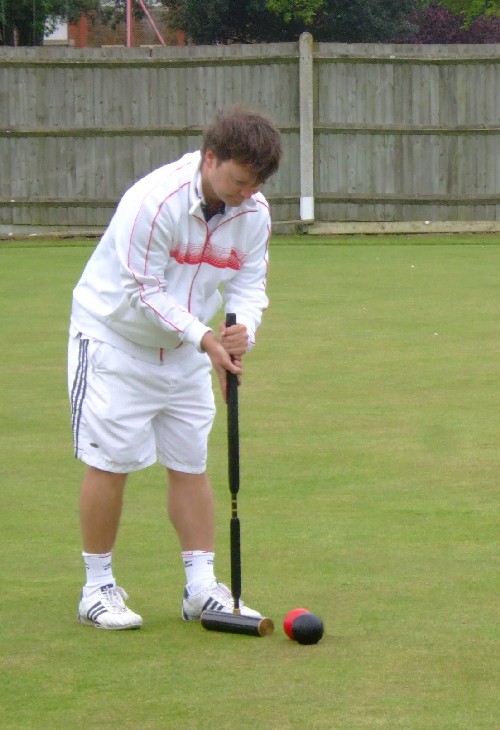 A good field assembled at Hunstanton over the May Bank holiday for the Robert Prichard Tournament on lawns which received praise from players as being conducive to precision play, and in weather described by one regular as "typically Hunstantonic" but which, thankfully, remained dry.

With one round to play in the Egyptian format Chris Patmore and Jon Watson could not be caught by the rest of the field, and, assuming both won their last game would each finish on 10/11 - but Patmore had beaten Watson earlier in the tournament and would therefore win by who beat whom. However Chris, to the delight of the manager and with his full approval, very sportingly said that under the circumstances he would prefer to play Jon again - effectively a final.

Given freedom from double banking on lawn four Watson gained early momentum but broke down at 3B. Patmore took full advantage of the short roquet left by the incomplete spread, going to 4B with a NSL, and when Watson's shot down the line missed by a whisker Patmore concluded the tournament with an elegant triple.

The cuisine had been excellent, the barrel of ale emptied, and there had been games a-plenty, prompting many to say they had thoroughly enjoyed the weekend.

But my lasting memory will be the great sportsmanship shown - an immense credit to croquet.