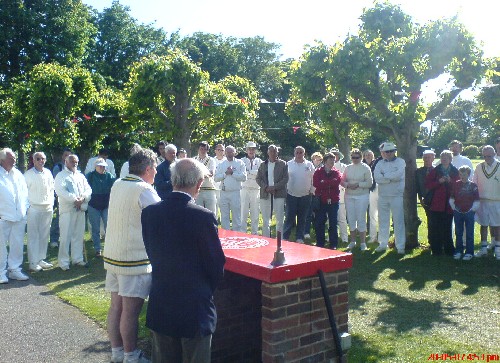 Nottinghamshire made it a hat trick of wins when they retained the Inter County Championship over one of the coldest Whitsun weekends on record.

Cheshire were leading at the end of Day 3, but with a bye in the last round they could only wait to see whether Nottinghamshire would equal their 9 match wins, as the holders had a superior game tally. Nottinghamshire played Essex in the last match and Keith Aiton produced a speedy triple to put them one up. On lawn 2 Robert Fulford stopped at hoop 3, but then tried to run hoop 1 again when he next got the innings. He later attempted a quadruple peel but failed at 2-back, leaving James Death a straightforward triple to clinch the title for Nottinghamshire. The team of Richard White (captain), Keith Aiton, Gary Bennett, Dean Bennison, James Death, Gordon Hopewell and Patrick Hort dedicated their win to their team mate Beatrice McGlen, who was unable to play this year due to serious illness.

Lancashire, Middlesex and Warwickshire were tied on 7 wins each, but Warwickshire lost out on promotion on the number of games won.

The wooden spoon was won this year by Devon, who came bottom of the Second Division, but the surprise team at the bottom of the First Division was Gloucestershire, who only managed one match win, despite having six minus players in their team. The teams promoted last season - Suffolk, Glamorgan and the Channel Islands - are all 'yo-yo' teams and might have been expected to be relegated as well. Suffolk duly obliged, with only one win going in to the last day, when they achieved a good 2-1 win over third placed Surrey.

Glamorgan managed to stay in the First Division with four match wins but the Channel Islands were relegated; Matt Burrow had been suffering with an injury which flared up again leading into the final day's play, and he had to go for treatment, leaving Richard Griffiths to play a game on his own against Essex. Permission was granted for Tony LeMoignan's wife Paula, an 18 handicap, to play in their last match against Avon, and she was partnered with Kevin Garrad on Lawn 2, where she was not at all fazed by double banking with the Fulford/Willard v Death/Hort match to decide the championship. This lawn truly was the place to be for the spectators, as Roger Tribe of Avon had to leave early for family reasons and Marcus Evans played on his own against Paula LeMoignan and Kevin Garrad in a fascinating game to watch. Paula played well above her handicap, even peeling Kevin through a hoop, but in the end superior tactics and a wonderful turn from Marcus, in which he scored six hoops with his ball and four peels with the 'dead' ball, allowed Marcus to peg out having done 12 peels.

Praise must go to Alan Cottle, the new Lawns Manager at Southwick, for the splendid condition of the lawns, helped by work over the winter and the acquisition of a new mower. Indeed for the first time the Southwick lawns were playing much faster than the lawns at Compton, especially on the first day. The Compton groundsman broke his ankle over the winter and work was delayed, with the result that some of the lawns had only just had their first cut. The unexpected slowness of the Compton lawns might have been part of the reason why play did not finish there on Day 1 until 20:40. David Harrison-Wood had a long turn after time was called, and two games in the Essex-Avon clash had exciting finishes after time, with David Goacher producing a triple peel and Robert Fulford achieving a +1T win by going round, doing the 4-back peel and pegging out.

The heavens opened on Day 2 and by Bank Holiday Monday Lawn 4 at Southwick was unplayable for the first session. Monday was also incredibly cold, with a huge wind chill factor, and the chubbiness of the players was due not to the catering, excellent though that was, but to the number of layers of clothing they wore. In the final match at Compton, in freezing rain, Nottinghamshire played Glamorgan. Dean Bennison had gone to peg and later failed to achieve what he wanted and executed a powerful scatter shot, his own ball crashing into the peg in the process. Not only did he fail to appreciate that he had pegged his ball out, but his partner and both his opponents, shivering on the sidelines, were equally oblivious, even although they had all seen the ball hit the peg. As Glamorgan were on 3 and 3 at the time they were probably quite glad that the spectators were powerless to alert them that the game could be prolonged!

As usual the doubles format of the Counties seemed to reduce some minus players to the level of mere mortals and cause higher handicapped players to produce spectacular performances, but in the end talent prevailed. Richard White started his game for Nottinghamshire against Yorkshire by going to 4-back on turn 3, then Keith Aiton performed a fifth turn triple and was in the club house before some games had scored a hoop. Peter Trimmer of Dorset performed a sextuple on the last day. Indeed many players seemed to raise their game on the final Tuesday, perhaps due to the reappearance of the sun.

Wiltshire enjoyed their debut at the Counties and did not disgrace themselves, achieving wins over Devon, Kent and Hertfordshire. Hertfordshire had started off like an express train but fell away to finish mid table. This was perhaps a good thing, as it was discovered just before the Championship that Paul Stephenson, having played last year for Essex, was an ineligible player, and had Hertfordshire finished in the top three they would not have been promoted.

Thanks are due as usual to Chris Williams for managing the event and to all the catering and ground staff at Southwick and Compton for making this such a successful and enjoyable festival of croquet.