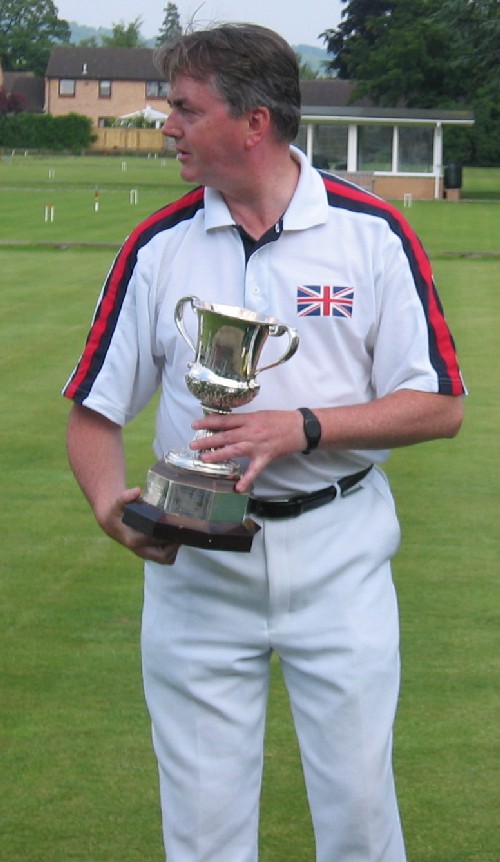 Keith Aiton in the third hit Samir's super-shot ball and went to 4-back with a ball just N of IV and a ball just S of II - very impressive with few shots looking like there could be an error - worst was he over-ran 5 past reception ball but then rolled to one foot or less in front of 6.

Samir hit in IV but put the ball off the lawn going to II. Keith hit and started a 4th turn triple - he played "safe" by putting a deep ball behind penult instead of at 1-back since he had to roll peelee over from behind 4-back. Of course K got peelee in the perfect position and, though he jumped over it, he just clipped it. Strangely, he chose to peel it and rushed the near ball towards II and played quite a good stroke getting a ball to 2-back but ran well past the 1-back "pioneer" (which was on the court's centre-line). Presumably trying to cut it from 2-3 yards, he missed.

In James' final game, he hit the lift and made a 1-back leave with a ball NE of 1 (the 4-back ball I think) where Stephen Mulliner's stance was difficult because of the hoop's position, and a ball near corner I (wired of course) - so Stephen had only the near maximum possible length shot. He liked the shot until it passed the 3/4 way point.

James started the sextuple but interleaved a TPO, finishing with two balls off leaving 4-back vs. 1. Stephen didn't get going from the contact and afterwards failed 2 - James finished from hitting the ball in the jaws of 2.