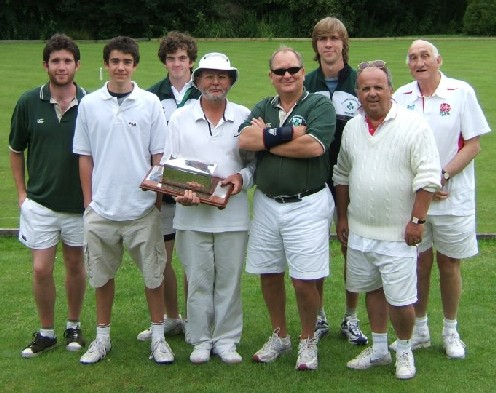 The CA England team won by 14 games to 6 against the Irish visitors. The teams were, for Ireland, Nathaniel Healy (1, captain), Conor Broderick (½), Ben Reeves-Smyth (3) and Danny Johnston (6), and, for England, Richard Griffiths (0, captain), Peter McDermott (1), Will Gee (2) and Klim Seabright (3½). Ian Vincent would also have played, but the counterpart member of the Irish team unfortunately was not able to attend.

The four youthful players (Conor, Ben, Danny and Will, collective years about 80) treated us to some impressive and adventurous play which was good to see. Watch out for them over the next few years. Conor, having recently done his first Triple Peel, was keen to develop the skill, and tried for more, with a spectacular Rover Peel from Penult being a highlight. Nonetheless he was denied success in his TP attempts. This time Dame Fortune smiled on Peter McDermott, who did his first ever TP with a 26, against Conor. (Yes, it was delayed, by about 20 years).

The captains agreed a format of 4 rounds of singles for day 1, played advanced except for Danny's games which were played handicap to accommodate his handicap of 6. Danny is a rapid improver, recently down from 16!

The format for day 2 was left flexible to allow for an odd number of games if needed, but in the event England was well in the lead after the first day, so it was agreed to play 2 round of advanced doubles on day 2, giving 20 games in all.

Many thanks go to Nottingham CC for providing the venue, to Ian Vincent for all sorts of support, including breakfasts at the clubhouse, and Rob Edlin-White for various meals and teas.