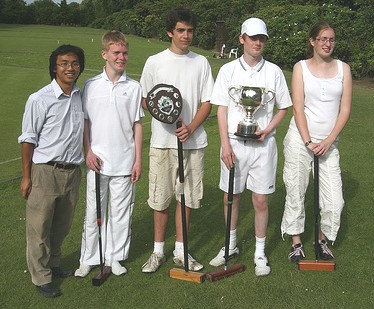 by Eugene Chang at Nottingham
17th July 2007 (Other News)

Attracting 4 entrants on the day, the competition was a round robin tournament playing 18-point handicap advanced for the association event and level play in the golf, and was thoroughly enjoyed by players and spectators alike. Moments of drama were provided by Will losing three balls into the stream beyond the lawns - well done to everyone who took turns raking the mud banks and finding them some six hours later! It was good to see promising youngsters who all played below their handicaps; with enough coaching, games and local support, they will soon be making their mark on the tournament circuit in the next few years!

With the success of this year, hopefully a larger entry can be attracted next year, so that other formats might be organised, including the revival of the Schools Championship. If you know of any budding youngsters in your local club or area who would be eligible to compete next year, please contact me at etychang#gmail.com.

Many thanks to Nottingham Croquet Club for hosting the event and to Patricia Duke-Cox for her support before and at the event.