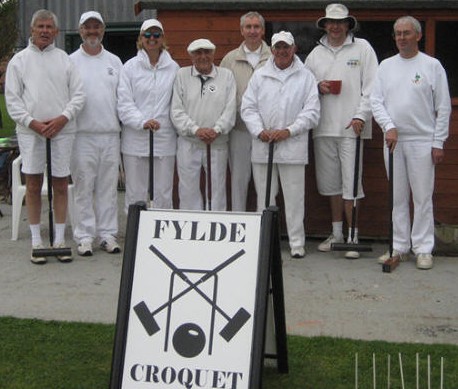 Fylde played Ashby at home on Sunday 9th September for a place in the finals weekend at Wrest Park. The Fylde team were Martin Bradshaw (12), Terry Vernazza (18), Leonard Ainsworth (18) and Betty Bates (24).

In the morning Leonard and Betty paired up for the doubles match against Derek and Jeremy. This they won +2. Terry ran out of bisques too early against Tim who played an excellent game on our difficult lawns and won +6. Martin had a comparatively easy win against Mick +11. At lunch Fylde were 2-1 up and needed two of the afternoon games to win.

The afternoon games were played in handicap order. Terry won +10 against Derek taking quite a few attempts to run the final hoop. Betty could not find form and lost to Jeremy -13. Leonard lost to Mick -7. The final game between the two captains Martin and Tim was a tight affair which ran to time. Tim had trouble hitting in on our undulating lawns and Martin managed to keep him out of the game to win +4 on time. A 4-3 win to Fylde who now go through to Wrest Park on 6th and 7th October.