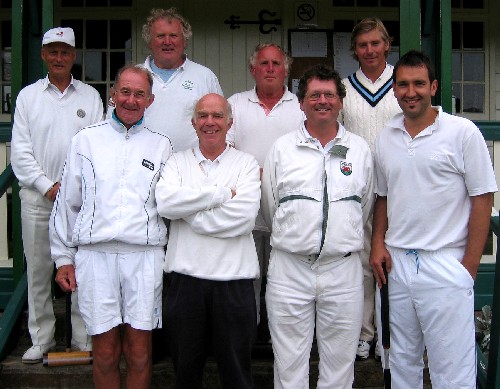 The Spencer Ell finished on a 3-way tie with 9 wins for Ben Ashwell, Chris Williams and Jerry Guest. Ben completed triples in both play-off games to win the event.

The tricky conditions at Southport led to many long games with many pegged-out endings. Three games ended +1, with Dave Mundy losing two of them, one at +2, and eight at +3. In fact we only completed two and a half rounds on the third day with play from 0930 to 2000. One game was pegged down twice, much to Bob Burnett's glee (since it included Dave Nick) and ended after nearly 5 hours play.

The play-offs started just after 4pm with play possible to 8pm - we managed to finish at 7.

A History of Ties

Since the selection events started in 1902 I can find only four examples of three-way ties and two of those occurred this year. The bye holder has won three times - I am the first not to have done so!! Also I have been involved in two of the 3 way ties!!

The President's Cup, which has been going since 1902 under various names, has not had a three-way tie to date.

Play off details can be found at http://www.croquetrecords.com/records/eights/playoff.htm