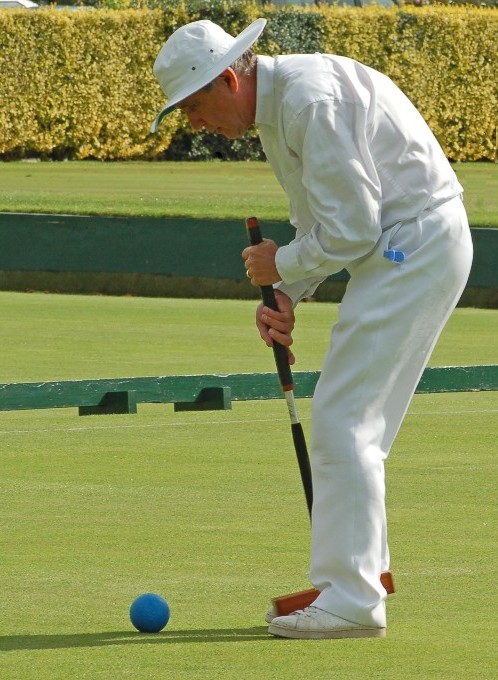 The All-England Handicap tournament could be unique in sport in the way it allows novice players to compete for a national title on equal terms with those at the top of the game. This year, following forty-one club tournaments involving over 350 players, and five regional finals, sixteen players from as far afield as Cornwall and Southport, and with handicaps ranging from 16 to -1, descended on Roehampton early on a sunny Saturday morning - some earlier than others - to contest the finals. The format was a five-round Swiss with three-hour time limits, with three rounds on Saturday and two on Sunday.

A number of players took some time on the first morning to familiarise themselves with faster-paced lawns than they were accustomed to, but all were impressed with the true playing surfaces. By the end of a gloriously sunny September day, there were, inevitably, two players with a 3/3 record - these were Andrew Webb (Pendle) and Barry Gould (Guildford & Godalming). Equally inevitably, six players were only one game behind, on 2/3.

Sunday morning dawned a little chillier, with a wind brisk enough to destroy at least one parasol. Andrew and Barry battled for the tournament lead on the garden court, with Barry eventually prevailing +7t. Barry could therefore secure the title in his post-lunch game against Mike Porter (Newport), but were he to lose, Mike and at least one of Andrew Webb, Robert Wilkinson (Huddersfield) and Mike Bottomley (Reigate) would be tied with Barry on 4 wins.

In the event, any possibility of late drama (and managerial headaches) was rapidly dispelled as Barry polished off his game +26 with a couple of bisques still standing, to claim the title with a perfect 5/5 record, and Robert Wilkinson defeated Mike Bottomley to guarantee second place. Both Barry and Robert earned handicap reductions, to 6 and 5 respectively.

Thanks go to the Roehampton club and its members for their hospitality, and in particular to Douglas Gurney both for his excellent management and for providing such great weather!