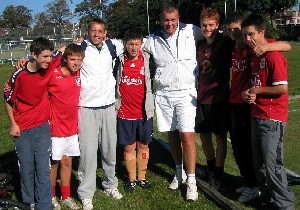 There were notable firsts for two players. Paul Castell completed his first competitive Sextuple to rapturous applause from a very impressed clubhouse. And Ed Duckworth completed his first, and second, Sextuple on the same day - and came close with a third (having completed all the peels, he rushed partner into Rover and missed the 7 yard pegout). Ed also became the first winner of the Consolation Plate to have only one loss during the three days - he arrived late on day 1, was penalised a game and lost the best-of-three when he lost his first game. He was unbeaten in the Consolation.

Grateful thanks to Roger Wood for his relaxed managerial style, and to the Compton Croquet Club for laying on such excellent lunch, tea and drinks.

Lasting impressions were of several players enjoying Irish Speed Croquet, and Marcus Evans coming close to finishing a TP - conditional on downing a half-pint after hoop or peel, and without leaving the lawn. He was last seen passed out in the hut. Legend has it that only James Carlisle has achieved this in the past (?).

This year's event was blessed with good weather described by a BBC forecaster as "the last days of summer". Recently moved hoops were firmly set in very dry ground and the lawns were generally in much better condition than they were earlier in the season. Friday began badly for Ed Duckworth, Kristian Chambers and Marcus Evans - having left Bristol at some unearthly hour they were seriously delayed twice on the M25 (first by an accident and then by two lorry fires) finally arriving at Compton an hour and 20 minutes late. The hard-hearted manager penalised all three with the loss of their first game in the (best-of-three) match which punishment, as it turned out, only affected Ed Duckworth who lost his "third" game to Jamie Burch (see results). Perhaps this was to prove something of a spur because he contrived to win all his subsequent games, cruising to victory in the Swiss with a run of 9 consecutive wins including his first ever competitive sextuple on Saturday morning. This was followed by a game in which he completed all six peels but could not peg out both balls, then a triple and finally a second sextuple. Indeed he only conceded 31 points in all 9 games, 14 of them in the last on Sunday! David Maugham, in his match against Chris Farthing, achieved all 5 peels of a quintuple, but was unsuccessful in attempting a combination pegout. Jack Wicks denied Reg Bamford any peeling opportunities in their second round match, but in their quarter-final Reg beat Peter Trimmer with a trademark scoreline of +17(SXP) +26(QP).

Meanwhile, by way of diversion, much of Friday was dominated by hydraulic engineering. A stopcock (half-buried in a pit) near corner 4 of lawn 1 had sprung a leak (about a litre every 30 seconds) and flooded that corner of the lawn. The combination of a squeegee roller borrowed from the cricket club and much bailing with beer glasses held the flood at bay for a while, but the flow was eventually diverted by Daves Trimmer and Maugham who utilised a length of hosepipe to siphon water out of the pit and away from the lawn - subtle adjustment of the height of the outflow produced a self-regulating flow which ran continuously for three days while, inevitably, we waited for a plumber.

The remaining quarter-finals were only begun around lunchtime on Saturday. David Maugham and Keith Aiton had convincing straight game wins over Marcus Evans and James Tuttiett respectively; Rutger Beijderwellen had a good tussle with Jamie Burch in the other and came home by +8 in the third game. Some young footballers practising at the goal near lawn 4 sent several footballs onto the lawns and were not at all convinced by the manager's statement that this was an important event with highly ranked competitors. The information that the current world champion was playing ("What, like Tiger Woods?") was met with initial disbelief which turned to cheeky delight when Reg appeared. They insisted on autographs and were pleased to be photographed. In the semi-finals Dave and Keith were game all by close of play while Reg, having had to wait until 1715 to start, was +26(QP) up against Rutger. In the second game Rutger took his first ball to 4-back but failed to run hoop 3 with the second. By the time Reg had made his break and 1-back leave the light was fading fast; Rutger decided to take his shot but missed and the game was pegged down. Earlier, various other occurrences provided extra spectator entertainment. Jack Wicks somehow managed to dislodge the tap at the site of the leak whereupon the exposed pipe disgorged water at an alarming rate under full mains pressure. Dave Maugham sprang manfully to the rescue and, at the cost of a considerable soaking and with a lively running commentary on the worth of the perpetrator, succeeded in refitting the tap and stemming the flow. A liquid trial of a different sort was made by Marcus Evans who, in his Swiss game against Dave Kibble, attempted a triple with the added requirement of drinking half a pint of Harvey's excellent bitter each time a point was made - the so-called "supernewt" challenge. The break took some considerable time under the eagle eye of adjudicator and beer dispenser Tim Wilkins: 13 points were scored before unsteadiness took its toll and Dave Kibble went on to win the game +3. Irish speed croquet has not been seen before at Compton and local members were bemused at the sight of participants dashing around and still managing to score hoops.

On Sunday morning Reg completed his sextuple against Rutger to win the match and Dave took just under an hour to wrap up against Keith with a +26(TP). The best-of-five final went the full course: first a triple from Reg, then two from Dave followed by Reg's third sextuple of the weekend to level match and then a final quadruple from Reg to win the championship at his first visit. Reg also took the peeling prize with Ed in second place way ahead of any other contenders. Perhaps the greatest delight and certainly the loudest applause of the weekend was occasioned by Paul Castell's win over Jack Wicks when he too completed his first sextuple. This year's field of 24 entrants with an aggregate handicap of -30 was the strongest ever since the tournament was moved to Compton in 1985 and there were also records for the number of games played and the number of peeling finishes.

Note that the first round match between Jamie Burch and Ed Duckworth only appears as two games because Ed arrived late on Friday morning and started having forfeited the first game - although he won the second, he lost the third and thus the match. This turned out to be the only game that he lost the whole weekend and he went on to complete two sextuples (the first his first ever!) on the same day! (Two others in the car with him were similarly penalised but both managed to win games 2 and 3 - Kristian Chambers and Marcus Evans.