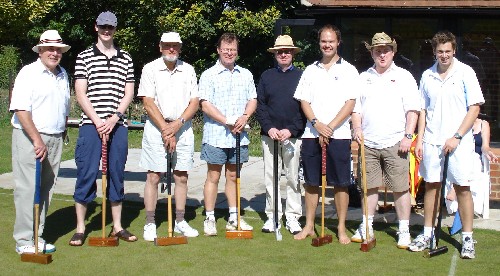 The Competitors - Howard on the right

by Jeff Dawson at Blewbury
22nd September 2007 (Other News)

The finals of the national croquet competition were held on Saturday 15th September at Blewbury, on a gloriously sunny day (in contrast to most of the rest of the competition!). Eight finalist contested for the two croquet sets which had been donated by Jaques as first and second prizes. The event was played as a draw and process, with consolation games for those eliminated from the main competition.

In the event Howard Cheyne won through to the final of both halves, so the two sides were 'married', with William Wheeler and George Houghton playing to meet Howard in the Final. William won through in a close-fought game, but was then defeated by Howard in the final. This meant that Howard, playing with his brand-new Pidcock mallet (a present from his girlfriend), won the event undefeated. The overall standard of play was surprisingly high, and a very entertaining day was had by all.