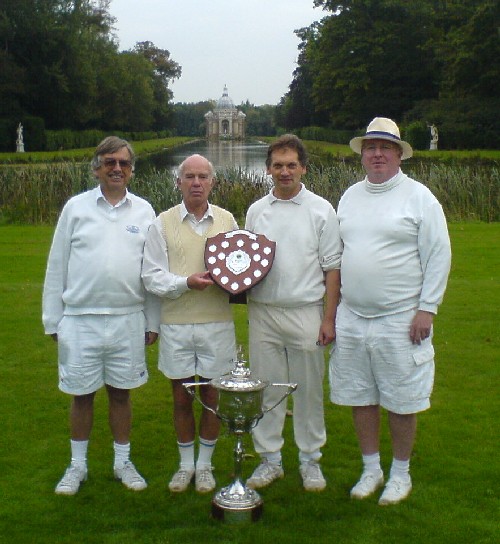 Dave Kibble's TP finished with a combination pegout, which might need explanation. It was quite a good one. What should have been a fairly routine triple for Dave ended up with a straight rover peel, which only just struggled through, leaving the striker's ball too close for an easy jump.

Inevitably, it clipped the peelee as it went through. (That might have been fortunate, since he had no good deep ball). Dave rolled the peelee to about 3 feet from the peg, then rushed an oppo ball about 4-5 yards away. The angle was about 45 degrees, so not easy. No doubt about the impact though. Dave says it was his first.

His quad in the second game was not without incident. After an excellent 3-back peel after 4, which went down close to 4-back, he failed to peel before 6, so peeled before 2-back, which was made without difficulty.

Some indifferent play (despite getting an excellent forward rush out of 3-back) left him a straight double, the penult peel barely got beyond the peg, but he got it through rover, if only just. The jump cleared it, and this time he had a getaway ball well placed. His effort to clear the peelee from rover was only partially successful, but he got a good rush on the fourth ball (which was north of the peg), and managed to rush the peelee past the side of rover to about 4-5 yards from the peg. On the flat lawn that was good enough.

So Bristol's number 3 and 4 managed twelve peels between them (I only managed two peels of a straight triple against Ken Cooper), proving merely that we can play breaks when given the balls on a slowish and flat lawn. Fortunately for Dave, I've forgotten (lost count of) how many times he approached the first hoop with his first ball in his game against Ken.

This year the Inter Club competition has a new trophy, the Beddow Cup, which was presented by Bernard Neal.The Beddow Cup was donated by A.E.Beddow and first awarded in 1901 to the winner of a competition between the ten best players invited to compete by the Croquet Association.The event was variously called the Champion or Beddow Cup, and the cup itself became the personal property of Miss Dorothy Dyne (D.D.) Steel after she won it for the fourth time in 1933. One of the greatest players ever, Miss Steel was a member of the Bedford club (one of the first English clubs, founded in 1865) and was Open Champion four times, and Women's Champion fifteen times.

As a result of her exercising her right to keep the Beddow Cup the CA were without a trophy for the 1934 competition, so a new cup was presented by the then President, Trevor Williams, which was named the President's Cup and has been competed for ever since. After Miss Steel's death in 1965 at the age of eighty the Beddow Cup was apparently sold by her sister Evelyn or her executors, and vanished from sight.

In 1978 Tom Anderson, a member of Wrest Park, saw by chance a small ad in the local paper offering a croquet cup for sale. The advertiser was an antique dealer who lived in the same village. He was shortly to move away from the area and hoped to sell the cup locally, as he believed it might have connections with the old Bedford club. After seeing the cup and making enquiries of the CA its true identity was established, and Tom and Judy Anderson and John Wheeler bought it between them, thus saving one of the sport's oldest trophies from being melted down for scrap, and earlier this year presented it to the CA.