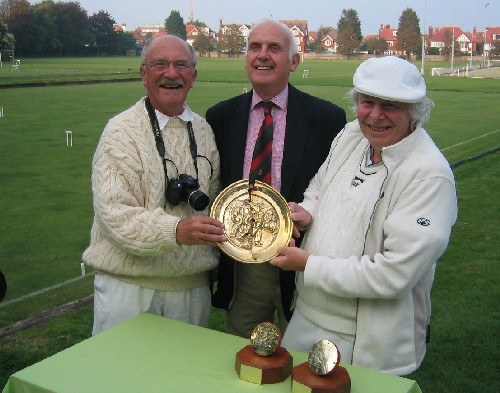 Locals were well represented (Ann Jarman and Arthur Nelson occupied third place) but could now quite match the visitors on day 3. This end-of-season event was the brainchild of Roy Wallis (Wol) who sadly died in June. Players enter as a pair and each day play three matches against another pair: a handicap doubles; 3 one-ball handicap singles; and conventional singles (the stronger of each pair play advanced; the weaker handicap). Points are awarded (5 for an outright win, 4 for a win on time, and 1 point for each one-ball win) and, as we all know, points mean prizes.

In this case the prizes are of Wol's own uniquely idiosyncratic devising: Chris and Julie received The Wallis Trophies (halves of a red Jaques croquet ball mounted on a wooden plinth); David and George The Wallis Plate (a "brass" plate/dish with an embossed scene of a three-legged race and divided in two, jigsaw fashion).

In Wol's absence the event was ably managed by Barry James who kept everyone busy, maintained an air of quiet authority throughout and organised very pleasant weather.

Even though the number of entrants was somewhat smaller than last year a good time was had by all, and this enjoyable weekend will surely continue as a fixture in the CA calendar.